Hamas - Islam and the PLO

The Gaza Strip becomes increasingly disenchanted with the PLO. 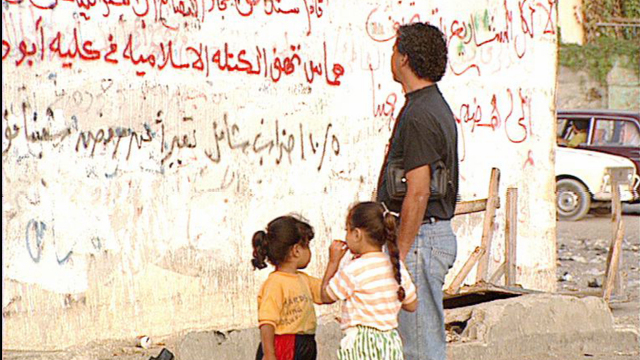 Under military occupation since 1976, people in the Gaza Strip live as virtual prisoners. Two thirds are refugees. Increasingly frustrated, many Gazans have now lost faith in the secular policies of the PLO, and are looking to more radical alternatives to win their claim for a homeland. Inconclusive peace talks aren't enough for most young Muslims, and the PLO is losing much of its more devout support to Islamist organizations such as Hamas.

"We in the Hamas movement will never compromise with the Jews", declare protesters on the streets of Gaza. The ruling PLO has increasingly lost favour with Gaza residents, and the fundamentalist Hamas have taken up the slack. The Israeli state is only adding to the unrest, for instance destroying many Palestinians' homes as revenge against the crimes of a single youth. With such uncertainty and helplessness, religion seems the only reliable constant. "Mohammed has become a martyr, and is sacrificed by God", says one bereft mother over the death of her son. Hamas is intolerant of peace talks and takes an inflammatory stance against the Israelis, with further violence imminent.
FULL SYNOPSIS
TRANSCRIPT