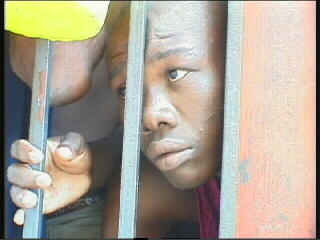 In 2000, gunmen murdered Jean Dominique Montas. He was a straight-talking popular journalist who investigated the corrupt - and that led him into conflict with the government.

He worked alongside his wife Michele Montas at Radio Haiti. Today Michele opens her own radio show with a recording from her husband: “It’s 7 o’clock – good morning everybody”. His voice from the grave has become a reminder of how delicate Haiti’s stability remains. The young priest Jean Bertrand Aristide was a populist who led an uprising against dictatorship but today he seems to be succumbing to Haiti’s same old violent riddles. Having overthrown their slave masters, Haitians became the victims of a chain of dictators. Now Aristide has his own band of loyal street thugs, the Chimeres, who do his bidding in much the same way that Papa Doc’s Tontons Macoutes did his. In Haiti’s bandit territory we investigate the assassination of Jean Dominique. And later at the gleaming presidential palace Aristide makes a rare appearance. He insists his government is doing all it can - but then why does the investigating judge not even have a fax machine? Will the charismatic Aristide deliver justice, or will he stoke the culture of violence, and use it to become Haiti’s next President for life? Produced by ABC Australia
FULL SYNOPSIS
TRANSCRIPT