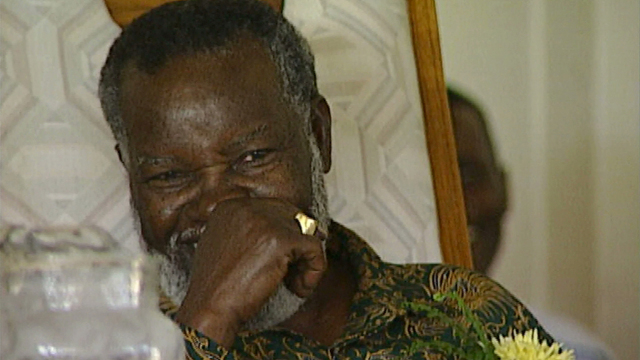 Sam Nujoma has threatened deportation and imprisonment, even “elimination”... and homosexuals are not the only ones at the receiving end of the ruling party's threats.

Christians, men who drink in drinking dens, foreigners and those who marry them, have all been singled out as undesirable in the speeches of President Sam Nujoma. This is in strong contrast to Namibia's progressive constitution, which protects diversity and human rights. Despite the ongoing threats against them, gays and lesbians recently held Namibia's first-ever gay pride march through the streets of downtown Windhoek. We meet Ian, a local activist, and a group of gay men. They were all once supporters of SWAPO and the President, but now fear for their future in the country they helped liberate. They feel cast aside in the name of political expediency. “If we don’t do something about it now everybody is going to leave the country or go into hiding. I don’t want to live a lie”. This feature explores the worrying contradiction in Sam Nujoma: the kindly patriarchal figure whose utterances at times betray him as a man who will go to any lengths to cling to power and to avoid the AIDS pandemic of many other African nations... Produced by SABC Special Assignment
FULL SYNOPSIS
TRANSCRIPT