The definitive documentary on Afghanistan's last 'holy war'. An extraordinary film looking through the eyes of Haji Adbul Latif, the 'Lion of Kandahar' and his Mujahideen. 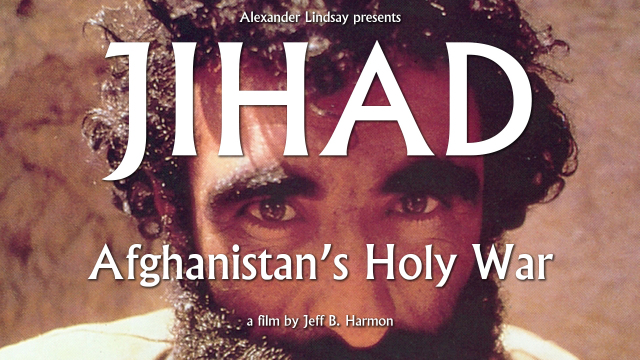 Filming clandestinely in Kandahar, Harmon and Lindsay have captured stunning images of combat and daily life under Soviet occupation. The result is an extraordinary documentary on Afghanistan's holy war as seen through the eyes of Haji Adbul Latif, the 'Lion of Kandahar' and his Mujahideen. The definitive film on the Soviet-Afghan War.

Director/Producer Jeff B Harmon and Cameraman/Co-Producer Alexander Lindsay spent over one year making JIHAD. Kandahar is situated in a desert plain where there are no mountains to hide in. Unlike the rest of Afghanistan, in Kandahar the Mujahideen live side-by-side with the Soviets and the Afghan army. Haji Latif and his warriors fight every day. It was for these reasons that Harmon and Lindsay decided to film in Kandahar, where it is not uncommon to die for Islam. They wanted to capture the essence of this holy war through the peasants who refused to become refugees. For it was the peasants who were on the front line, waging a war with a modern superpower against seemingly impossible odds. Harmon and Lindsay made three separate trips into Afghanistan to make JIHAD. The logistical problems were vast. On a trip to Kunar Province, 13 porters carried equipment over mountain passes too steep for mules. In the city of Kandahar, Harmon and Lindsay filmed one city block from both Soviet and Afghan posts, hiding themselves and their equipment under prayer shawls. It had been over a year since a film crew had been able to enter the city. The previous crew had been ambushed on their way to the city. During the filming of JIHAD a spy reported the presence of the film crew in Kandahar. The Soviets and Afghan Army launched a military operation to capture or kill Haji Latif and the filmmakers. Having been pinned down for three hours under machine-gun and shell fire, Harmon and Lindsay eventually managed to escape to the outskirts of the city. Only after a considerable time with the Mujahideen at the front, were the filmmakers able to capture on camera the warriors' most personal feelings and beliefs. JIHAD centres on individuals, some of whom were captured or killed during the making of this film. The total candour of the Mujahideen is what distinguishes JIHAD from any previous documentary on the Soviet-Afghan war. In JIHAD we penetrate the minds of those Afghan guerrillas who fought the Soviets and, against all odds, eventually defeated them.