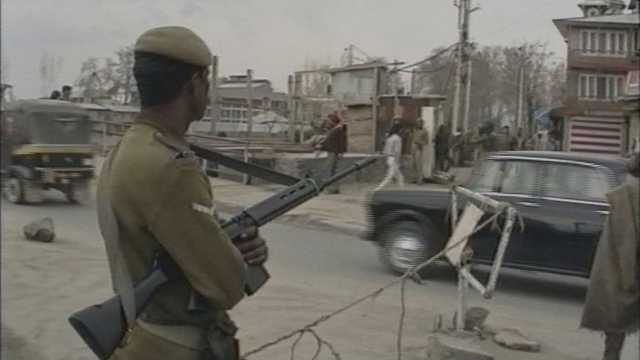 The beautiful state of Kashmir is home to seven million people. The mainly Muslim state was claimed by India in 1947.Since then Kashmir has been the focal point of a violent struggle between Muslim Nationalists and the Indian army. Violent social unrest between 1988 and 1991 has led to the death of 3000 people.

Young Muslim Nationalists attacked an army checkpoint at night. This was met with a harsh response by the Indian government. At dawn several arrests were made and local people are harassed. This is not uncommon. To the news of the death of an Indian soldier 300 shops were burnt to the ground.
Worse human rights abuses occurred when in a rural village men were tortured and 53 women were gang raped by Indian soldiers. "I was caught by four men of the army and they tore my clothes. Then I don't know what happened", says one of the female victims. One mother laments the sexual abuse of her daughters. "I have two big girls. They can't be married now, no one will take them as brides now." Incidents like these have far-reaching consequences for both sides of the struggle. A film by Mark Stucke.
FULL SYNOPSIS
TRANSCRIPT