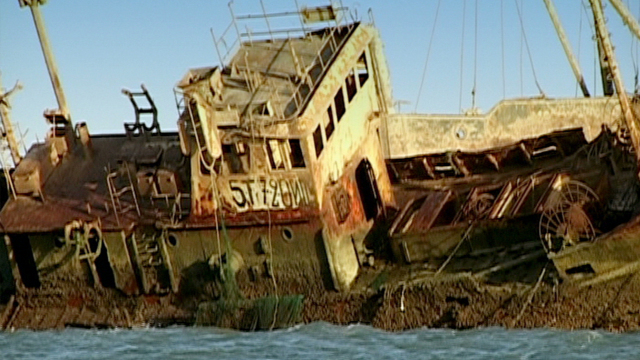 In Nouadhibou, Mauritania’s main fishing port, a group of angry fisherman are protesting. Last night, one of the local fishing boats, a pirogue, disappeared; one of the men is still missing.

It is a common occurrence: last year 290 local fishermen lost their lives. They blame Europe. In exchange for 54 million pounds a year, around 250 EU boats can fish these waters. Locals say they now have to go out further and longer for a decent catch – an activity which can cost them their lives. “Pirogues are being sunk by trawlers sneaking into rich waters close to shore reserved for local fishermen. My catches are a tenth of what they were,” complains one. We go out with the military unit who police the agreement and are meant to be inspecting European trawlers. However, we ended up only chasing a local boat suspected of fishing where it shouldn’t, despite reports that EU trawlers were using illegally sized nets and catching fish they are not licensed to. It’s clear they were targeting the small fry instead of the EU trawlers. The problem is that the EU deal brings in 50% of Mauritania’s hard currency and the government views the agreement as a guaranteed paid cheque. “Mauritania needs cash – why shouldn’t we sell our fish?” asks the Minister of Fisheries. The local fishermen however are not seeing a penny of the money. They feel the one thing they have to offer the global economy has been stolen from them, condemning them to a life of poverty and perpetual danger. Has Europe persuaded Mauritania to sell its future? A report by Kim Willsher for Unreported World. Produced by Mentorn
FULL SYNOPSIS
TRANSCRIPT