Last of the silver Bullets

We investigate how the long-established practice of feeding antibiotics to farm animals has now being linked to the emergence of unstoppable super bugs in our food. 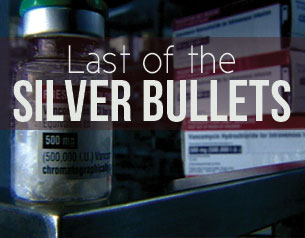 With Austria being the latest country to confirm a case of BSE, we are forced to confront the health risks posed by modern patterns of consumption. We investigate how the long established practice of feeding antibiotics to farm animals has now being linked to the emergence of unstoppable super bugs in our food. With doctors also accused of habitually over prescribing, the worry is that these drugs will lose their firepower. Should antibiotics be fed to farm animals? More importantly, are we prepared to pay a potentially deadly price?

In Canberra hospital, the death of a highly contagious patient in special isolation is cause for alarm. She had become infected with a deadly strain of bacteria - even the strongest antibiotics hadn't worked. It is a grim reminder of life before antibiotics. The bacteria concerned - vancomycin-resistant enterococci (VRE) - are so contagious and hard to treat, hospitals are forced to take extra precautions. Hospitals use vancomycin as the antibiotic 'silver bullet' to fight infections when all else fails. As a wonder drug, it was over prescribed in large amounts both by hospitals and GP's. Because of its overuse, the bacteria built up an immunity to it, creating the 'super bug' VRE. However, humans aren't the only ones capable of developing antibiotic resistant bugs in their system. "We know from overwhelming evidence in Europe that if you use the same classes of antibiotics in animals, resistant bacteria develop. They come across the food chain and they can make people sick", comments Dr Peter Collignon, Director of Infectious Disease at Canberra Hospital. A clear link was uncovered 5 years ago, when a patient in Australia appeared to have developed a resistance to vancomycin, but had never used it before. Two other cases were found on the same ward. As the doctors struggled for answers, they returned to European studies which had showed a link between VRE in animals and humans. After scouring local farming areas, the Australian Agricultural Department found small traces of VRE in a poultry farm. If anyone had eaten the meat, it could have got into their system. The poultry had been given Avoparcin, a similar drug to the human antibiotic vancomycin. "I think the finding was very significant and highlighted that we could possibly have a problem with transfer of VRE from animals to humans or vice versa", summarised Dr John Ferguson. For years, farmers have been feeding antibiotics to their animals to make them fatter, faster. They are routinely mixed into the feed stock to lower the death rate and they help prevent disease in crowded sheds and promote growth. "The only reason we use this product is because we have a huge economic advantage", says Dr Jeff Fairbrother, of the Australian Chicken Meat Federation. However, we discover that the authorities have preferred to look the other way when presented with evidence of a connection, and official systems for testing food are being seriously challenged. The industry is worried about who will pay for testing: "You have to place balances between what is fair and reasonable and what is likely to achieve significant outcomes", says Warren Truss, and many farmers fear they will be the losers if they stop using antibiotics. It is a perilous situation to be in. If VRE becomes more prevalent in our food, doctors fear it may genetically fuse with golden staph, one of the most aggressive bacteria known to medical science. If we get a germ that is untreatable with current antibiotics, we're back in the pre-antibiotic era for that super bug. Although the medical profession must bear some of the blame for the rise of these drug resistant bacteria, it is now time to call the animal livestock industry to account. For a mere 60 years, human beings have been able to fight life threatening infections. Now the overuse of miracle drugs looks set to destroy this profound benefit to human health. Should we really be gambling with the 'last silver bullets'? Produced by ABC Australia
FULL SYNOPSIS
TRANSCRIPT