Legacy of the Bombs

The deadly legacy of the Afghanistan bombings 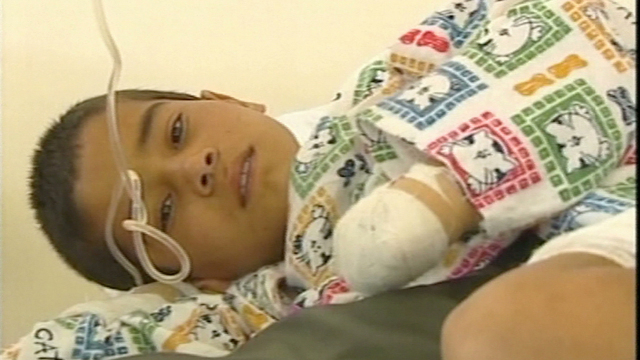 11 year-old Sharif is rushed into hospital, his body covered in blood. He and a friend had been playing with an unexploded shell when it detonated, causing them both horrendous injuries. He is one of many children who have been injured or even killed by the legacy of the American bombing.

The ground around Kabul is littered with yellow cylinders from unexploded cluster bombs. Although de-mining organisations like HALO are working to clear them, they simply cannot work fast enough to clear the debris that litters the hillsides. Meanwhile, America defends its use of devices like cluster bombs: "They are used as a substitute for people. Otherwise we'd have to send more people and there'd be a lot more dead Americans", claims retired air-force colonel, Robert Chandler. But this is of no consolation to little Sharif, who loses his hand as a result of his injuries. As we watch him lie crying on his hospital bed, we are forced to question American claims to be waging a war without victims. Produced by ABC Australia
FULL SYNOPSIS
TRANSCRIPT