Beyond the Boiler Room

In July 2001, an international police squad burst into a bustling Bangkok office and arrested 80 young Western expatriates involved in fraud on a global scale. 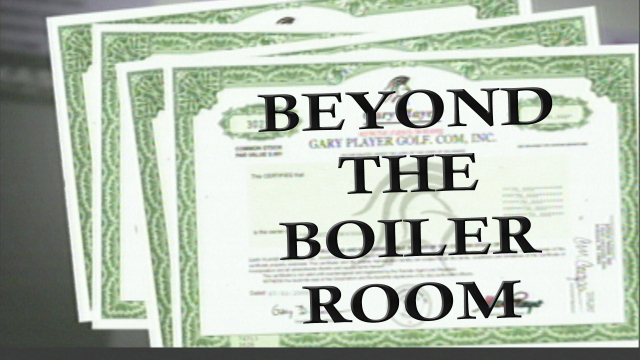 Those arrested had allegedly been part of an illegal brokering operation in which they 'cold called' potential investors with lures of fast money from glamour stocks. It was a classic example of what's known as a 'boiler room'. We piece together the Bangkok episode and follow the money trail to discover how the global economy can produce fraud on a worldwide scale.

"Please cooperate with us. We have the court order to come and search the place. This is a joint operation with the Royal Thai police, the Anti Money Laundering Office, the Department of Labour, the FBI and the Australian Police.” This is the outside world’s first glimpse of the Brinton Group. Following extensive surveillance, on the 26th July, the Thais led an international team to raid the Bangkok offices. The brokers were working without permits and all but the leaders would soon be deported back to England, Ireland, the USA and Australia. Inside the offices, the police found large amounts of US currency, sales pitch scripts, warnings about Australian investors who should not be called any more and a pile of share certificates for different US companies. It clearly showed that the Brinton Group was operating an illegal brokerage. We go inside the organised chaos of the Boiler Room and see how stock in a cutting edge, high tech company is pitched to unsuspecting clients. “What we handle is internet gaming – it is a one trillion dollar a year industry. All I’m saying is I want one chance – one vote of confidence. I need you to trust me 5%, I’ll earn the other 95%.” says one fraudster. When the office was raided, there were different clocks, indicating different time zones. The brokers were actually speaking out of Bangkok, but used the time zone in Japan. Police told us they suspect that telephone calls to a more financially-respectable sounding Tokyo reached a virtual office and were transferred through to Bangkok. The fraudsters confessed that scripts were used that have been devised in such a manner as to overcome all the objections of potential clients, such as Debbie Ireland who was sold shares by the Bangkok boiler room. “They kept calling with a deal that was too good to miss out on. We never received the share certificates, but at the time I didn’t think it was a big issue”. “They could give you information that other people didn’t have access to,” says Mark who invested $76,000 in a company allegedly owned by the renowned golfer Gary Player. He was told it was listed on the prestigious NASDAQ. It wasn’t – it was being traded on a lesser-known and risky market .When the share prices went up, he wanted to sell, but the Brinton group were reluctant to let him do so. In our investigations, we couldn’t find a single investor who bought shares from a boiler room who’s been able to sell them. Boiler rooms work in part because of a loophole in US laws. Shares are sold to Australians under “Regulation S” and can’t be resold in the US for one year. Are Asia’s boiler rooms simply money factories for slick American operators, whose activities are conducted right under the noses of market regulators? One of the prime attractions to companies that are sold through boiler rooms is that they’re the latest and greatest new technologies. James Martin learnt about boiler rooms the hard way. He had $7.5 million injected into his business software company by a promoter in exchange for control of his stock. He claims the company was hijacked and its shares sold to Australians through a Bangkok boiler room. Some US companies take money from boiler rooms then turn a blind eye to what happens with their stock. James Martin wasn’t prepared to do that and pulled the pin on his own company. “They thought I would be greedy enough, want the money and shut up. I could not build a company knowing it was off false gains.” He however is an exception. Boiler rooms continue to fleece unwary investors by exploiting the global markets. “ A little bit of greed and a little bit of urgency. Its all about getting people to send their money immediately to a significant number of strangers.” says Anthony Elgindy. With such rapid growth of the global economy, the platform for international fraud has never been greater. This powerful piece of investigative journalism unravels an incredibly, high-profit scam and forces us to question how we can stop this new wave of global fraud. Produced by ABC Australia
FULL SYNOPSIS
TRANSCRIPT