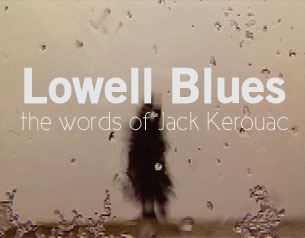 Lowell Blues is a 30 minute Film Poem fusing language, music and Image to explore Jack Kerouac's childhood holyland - Lowell Massachusetts. The film is excerpted from Kerouac's novel Dr. Sax, which is set in his hometown.
The film interprets how place activates the writer's imagination, and how the writer's art reshapes his city with reverence and respect.
Between the frames we recollect the life of a young writer exploring his origins - education, the Catholic church, birth and death. Kerouac's text speaks to the 1930's in which he grew up. By using both archival and contemporary footage, Lowell Blues melds modern experiences together with Kerouac's childhood to create a timeless sense of place.
Ferrini paints an illuminated landscape rich in mystery and possibility. Lowell Blues is a canvas in motion. A canvas made even more vivid by a haunting soundtrack by alto saxophonist Lee Konitz and Boston's own "godfather of punk" Willie Alexander.
Lowell Blues, like Kerouac's writing, swirls word and Image, music and movement into ethereal Images of America's abundant, ever morphing character. Lowell Blues remembers the Place Kerouac could not forget, the city on the river where "memory and dream are intermixed in this mad universe."
Readings by: Gregory Corso, Johnny Depp, Carolyn Cassady,David Amram, Robert Creeley, and Joyce Johnson.
Music by: Lee Konitz, Willie Alexander, and Jim Doherty. Produced by Ferrini Productions
FULL SYNOPSIS
TRANSCRIPT