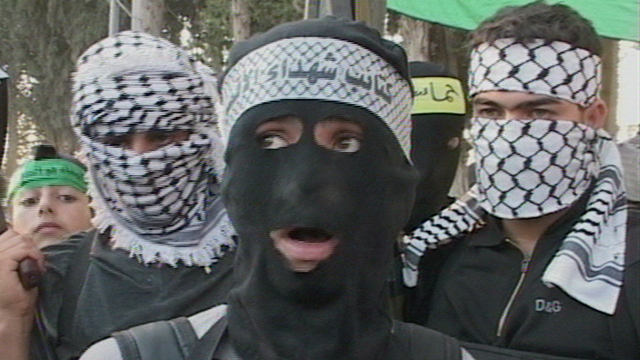 Palestinian suicide bombers are blowing themselves up in Jerusalem, killing dozens of Israeli citizens. Israel is retaliating by sealing up the West Bank.

Strapped with explosives, Izzedine Masri left his affluent home near Jenin to blow himself up in Jerusalem – killing 15 Israeli civilians. It’s not too hard to find others who want to follow his example. ”Many young men seek this martyrdom because it’s accepted by God and has no judgement”, says one young man. Israel’s attempts to hit back harder have only served to deepen resistance and unite the Palestinian factions. “Fatah, Al-Kassam Brigades and Islamic Jihad are united, and have pledged to avenge the martyrs blood,” yells one hooded gunmen at a Hamas rally. But much of the popular anger is reserved for the Palestinians who betray the cause and work with the Israeli secret service – the Shin Bet. “The state of Israel could not have existed and would not be able to exist without these collaborators,” says Rami Barhm. Secret video footage shows the gruesome execution of a Hamas collaborator. The information he provided to the Shin Bet led to the death of two of his colleagues. Senior Shin Bet officer, Moshe Kuperburg was in charge of recruiting Palestinian agents and collaborators. ”Intelligence is the most important thing because it feeds the military and the government.” He claims they have Palestinian spies in the senior leadership of every Palestinian faction. Rare pictures from the security service’s own website show agents working undercover, immersing themselves in Palestinian communities. However, there is widespread criticism of their recruitment methods. ”Israel pressure Palestinians to collaborate, both in torture and interrogations,” comments Jessica Montell, of human rights group B’Tselem. Produced by SBS Australia
FULL SYNOPSIS
TRANSCRIPT