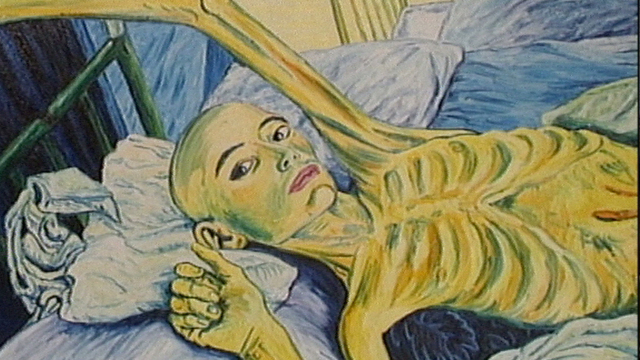 Travelling with Medecins Sans Frontieres, George Gittoes travelled to war-torn Afghanistan to capture life there via the medium of paint.

The artist had the opportunity to speak to thousands of Afghans clinging on to an existence in the devastated country.Through his films, photography, paintings and writing, Gittoes takes us on a journey through Afghanistan in the aftermath of the American attacks, portraying the suffering witnessed in refugee camps and by those injured and killed by landmines, his work is about "the individuals, the normal human beings that are mashed by the machine". Yet not all that he sees is pain and devastation. He discovers moments of beauty and light amongst the desolation of Afghanistan. His work documents the joyous spectacle of an Afghan wedding, with the crowds dancing and playing music around the happy bride. He is pleased to discover evidence of the "resilience of the human spirit". But Afghanistan's prospects seem bleak. "There's not an intelligent person in Afghanistan who doesn't believe that the country's on the verge of civil war." For him, the soldiers of each side are like young fighting dogs "heavily armed and ready to go once their masters let them off their leashes." This poignant film conveys a strong sense of the suffering of Afghanistan's people, whilst reminding us of the country's forgotten beauty. Produced by SBS Australia
FULL SYNOPSIS
TRANSCRIPT