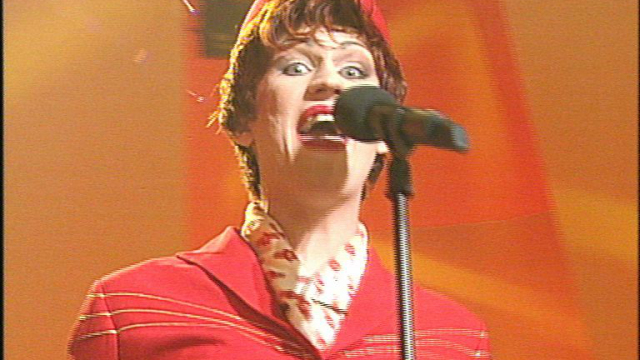 Slovenia is a European nation but it's attitude to sexual expression is still conservative. Attitudes to homosexuals is explored through three 'sisters' who are the entrants for the Eurovision song contest.

Sporting racy Air Hostess outfits, Slovenia’s entrants, ‘Sestre’ (Sisters), pout full red lips at the camera and sing about love and tolerance. For the ‘sisters’ are in fact a trio of transvestite men, and their journey to the finals hasn’t been easy. “We are a very homophobic nation,” states one young girl amid the flashes of disco bulbs. “We say we are Europeans, but it is clear to see in terms of sexual tolerance we are very different.” The art scene in Slovenia is progressive, and there is a growing sub-culture among youths influenced by T.V. from London and Amsterdam. But there is also a feeling of identity crisis among the country that has prided itself as the uncontroversial rock of the Balkans. "We are aiming for the EU,” says one politician. “We don’t want to improve our position, nor jeopardise it. We have nothing against the Sisters, but if they are bringing human rights to EU attention, and everyone is interfering, we do have a problem.” A report that addresses the more serious issue of homophobia in Slovenia. Produced by ORF Fernsehprogramm-Service GmbH & Co KG
FULL SYNOPSIS
TRANSCRIPT