The Tamil guerrillas have a lethal weapon: video equipment 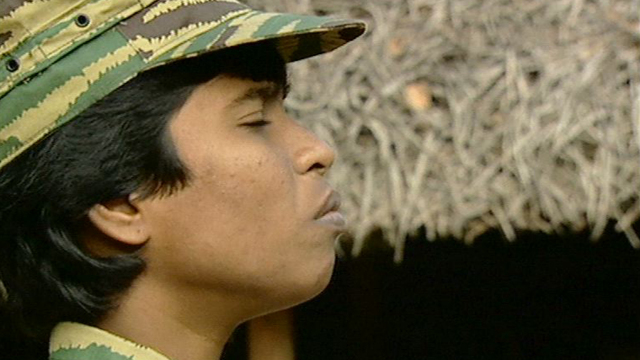 We get a glimpse at one of the Tamil Tigers' most effective weapons - the camera teams shooting the Tigers' propaganda videos.

Blood drips off the deck; a torrent of rapid gunfire sores through the air. We are in the midst of a savage sea battle, fought by the Sea Tigers - the maritime arm of the Liberation Tigers of Tamil Eelam. For 19 years, the Tigers have campaigned for an independent homeland for the Tamil minority. With a cease-fire now declared, we get a glimpse of one of their most effective weapons - the camera teams who record the bloody battles between Tigers and Government troops to produce propaganda videos. These videos are sent to Tamils living abroad who secretly donate about $60 million a year to the cause. They are also used to recruit and boost morale in the villages. Calling themselves the Truth Tigers, these men and women are expected to be in the first wave of any attack - armed only with video cameras and suicidal bravery. "On the battlefield we don't think about death you get so caught up in documenting what is happening," says Nadhi, a 21-year-old female veteran. Produced by ABC Australia
FULL SYNOPSIS
TRANSCRIPT