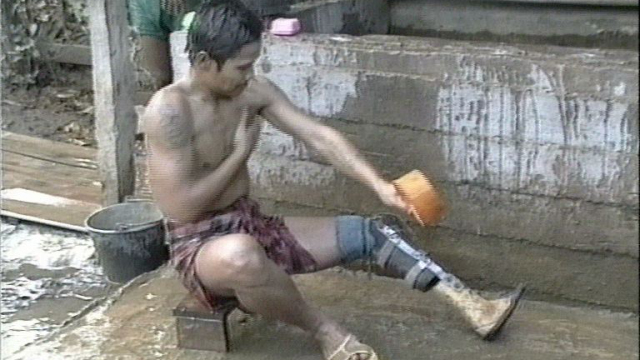 The Karen have been battling for independence ever since Burma itself became independent. Their resistance fighters have countered well the Burmese army's attempt at defeating their fight for a separate homeland. The mainly Christian Karen form the largest ethnic minority in Burma, and fund their movement by logging valuable teak in the forests. But the Burmese army is sealing off the border with Thailand to stop this trade and hence the Karen's source of funding.

Despite the offer of a peace treaty from the Burmese government, the Karen are deeply suspicious. 'We must look carefully at this situation", says General Bo Mya, a leader of the Karen. "We cannot sit with the military government and talk peace. We must talk to good men - not to murderers and rapists." Manerplaw had been where the Karen National Liberation Army had positioned their headquarters, but now lies deserted. The conflict has torn families apart: although Major Nay Myo fights with the Karen rebels, his brother fights for the Burmese army. "We can only see the enemy as the enemy", says Nay Myo. "Burma will only see peace when the military regime is removed. I have no other feelings."
FULL SYNOPSIS
TRANSCRIPT