Struggling to come to terms with Rwanda's ethnic cleansing 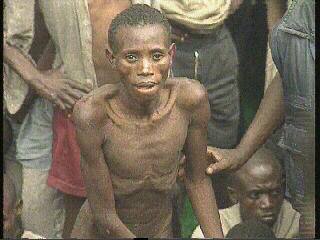 This film takes a look at the immediate aftermath of the horrible ethnic violence that left hundreds of thousands of Tutsis dead: the Rwandan genocide of 1994.

Four of Kigali's five remaining judges hear a civil case in the city's only court room. Not one person has been tried and sentenced for the genocidal killings which swept Rwanda last year. The country's prisons are jammed full. Little attempt has been made to hear cases: the judicial system and police investigators are non-existent. In Giterama prison, 8000 men live in a building designed for 1,300; everywhere you look blank-eyed men huddle in filth. In contrast aid pours into refugee camps outside Rwanda. Virtual cities exist despite Kigali's attempts to force the refugees home. In a blatant rewrite of history, a camp leader in Zaire blames the Rwandan Patriotic Front for the genocide. At a camp forbidden to UNHCR we interview a former Rwandan Army spokesman. He admits the war may rekindle. Without the revival of Rwanda's justice system the cycle of war, vengeance and death will continue.
FULL SYNOPSIS
TRANSCRIPT