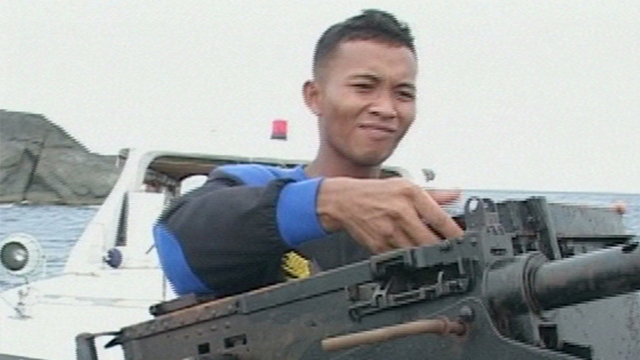 Both military excess and separatist frustration plague war-torn Aceh, the northern region of Indonesia that wants to follow in East Timor's footsteps.

Indonesian police stop and search vehicles for suspected separatists, known as GAM. They commandeer a large car and drive to a disco. The police are high on drugs and offer us some. We find they have even given them to children as young as ten to help them inform on GAM. Indonesia's most wanted is Ishak Daud, GAM spokesman in East Aceh. He says the separatists are "protected by the people, funded by the people". But villagers here pay a high price for this support. The military burn houses and kill indiscriminately in response to rebel ambushes. One man whose cousin is a GAM member was tortured horribly by soldiers, along with his pregnant wife. "It's hard to tell the difference between GAM and ordinary people", admits one foot-soldier. Meanwhile life is sweet for the military's top brass, like Maj. Gen. Mangaberani, who dismisses the rebels as thugs, "schooled in terrorism". He wants to see an end to the Free Aceh movement this year, but his vicious and corrupt troops are winning few hearts and minds. Produced by SBS Australia
FULL SYNOPSIS
TRANSCRIPT