Minarets in the Face of Destruction 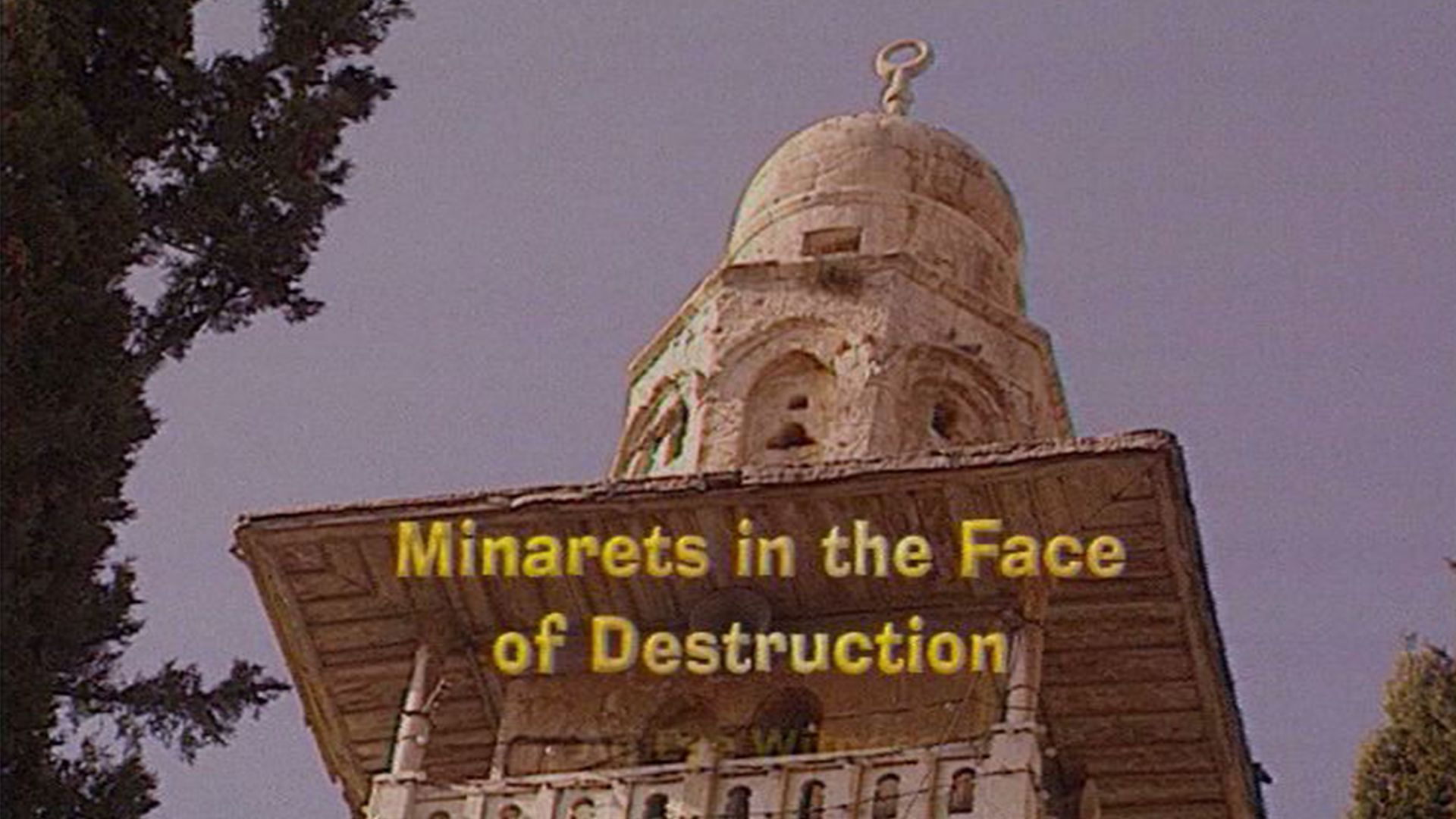 Journeyman presents an Arab produced film which recently won the silver award at the Cairo Film Festival. Filmed from the point of the Palestinian Diaspora, it returns to Israel in search of mosques and other Palestinian holy sites left behind by the local population when Israel was created. What it finds at many of the sites of ancient mosques is destruction and desecration. In its moody and poetic style the film offers body to those searching for a deeper understanding of the Palestinians' desperate sense of loss.

Cows wander through a crumbling mosque, urinating freely on the floor. 'The place where Muslims have been praying since the Omari conquest in the 8th Century has been turned into a cow's pen! This is the civilisation of the 20th Century?!' despairs a local Muslim. Before 1948 more than 18 000 people used to live in Ein Al Zaytoun. Now just two families remain, and there is no-one to look after Allah's mosque. Mosques are considered the property of God, and to let them fall into such disrepair is seen to be an unforgivable insult. Bright multi-story apartment complexes tower over a ramshackle, tumbledown Minaret. Well-paved roads and shiny restaurants surround the former Muslim area. But no calls to prayer echo from the tower. 'The Waqf are officially looked after by a committee affiliated to the Israeli Ministry of Religions,' explains Shaikh Ahmed Abu Ajweh. 'Needless to say, the committee and the Ministry take good care of non Muslim interests. They are seeking to liquidate all mosques in Palestine.' Even where Muslims have tried to renovate mosques themselves, such as the Hiteen Mosque in Jaffa, the Israeli authorities are accused of being obstructive. 'In 1991 we started to renovate the mosque. As we started to renovate it, the police and army forces rushed into the place. They arrested a number of youths. Sometime later, a military order was issued preventing the renovation works. Then a fence was erected around the mosque. We were told later it was declared a closed military area.' Where renovation has been sanctioned, it has often been only to turn mosques into museums, art galleries or restaurants. 'Fish in a Mosque!' unashamedly blares from a newspaper advert in Magdal Aqsalan. The Jewish defence is frank: if no-one lives there, then the property is up for grabs. 'No-one ordered the people to leave 40 years ago,' states a Bulgarian Jew who now lives in a mosque, alongside a plastic factory. At a museum, once a thriving mosque, questions from the filmaker are met with cold silence. And now Palestinians fear Israel has its sights set on Al Aqsa - the third holiest site in the Muslim World. A Jew clad in a bright blue robe and decorated with a gold crown and harp explains the conflict: 'On Temple Mount there is the Dome of the Rock, which is a Mosque for Muslims. But 200 years ago there was a Jewish Temple in its place.' Despite UN mandates, 70 years of excavations and tunnelling have seriously damaged the Al-Haram site, and the mosque is in danger of collapsing. The Hague Convention of 1954 undertook 'to prohibit, prevent and put a stop to any form of theft, pillage or misappropriation of, and any acts of vandalism against cultural property'. The erosion of important religious and cultural symbols continues. For these reasons alone, shouldn't Israel and the world make more of an effort to preserve them? Produced by Link Productions
FULL SYNOPSIS