In the Name of the Lord 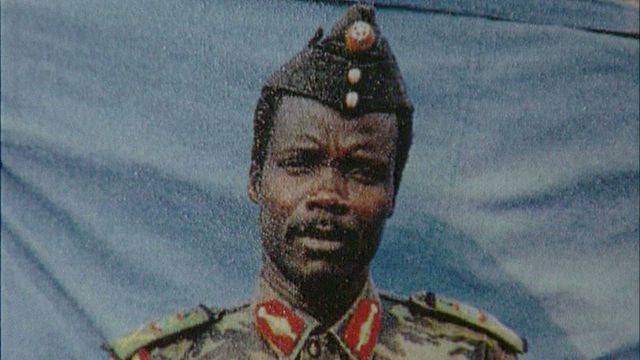 The Lord's Resistance Army, or LRA, has carried out a brutal campaign of terror in Uganda since 1987, using abducted children to carry out its terrible massacres. We go to Uganda's north to profile the gruesome and desperate rebels.

A child of 12 or 13 reveals the tactics of commanders of the LRA: “First they killed one person. Then they made others eat the body.” For 15 years now Joseph Kony, the shadowy leader of the LRA, has been fighting to set up a Messionic Christian State in Uganda. And it is children who are expected to carry out God’s orders: “When he goes to war, he doesn’t go himself, he selects children to go and fight,” reports a recently escaped abductee. “They can be easily threatened and deceived,” explains a trauma counsellor. As many as 15,000 children have been taken from their families by the LRA, and brainwashed to become fanatical fighters. Kony’s control over the child warriors is absolute. He tells them they will be invincible if they chant the right words, or coat themselves in oil and ash. Conditions for the children are appalling. And recently disease and lack of food has forced the LRA to free, or kill, the weakest or noisiest children. The ‘war on terror’ has the LRA in its sights: hopefully soon their cause will meet its maker. Produced by SBS Australia
FULL SYNOPSIS
TRANSCRIPT