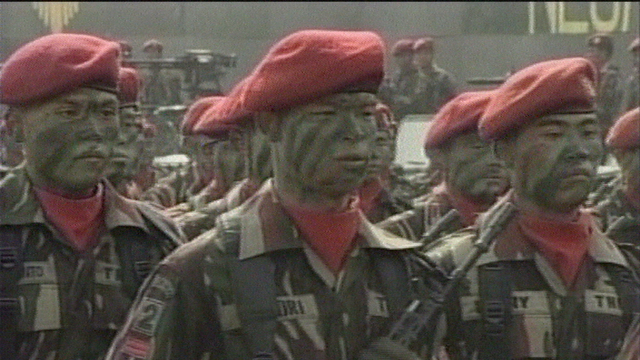 Religious extremists and political groups are all battling for power in a destabilised Indonesia. But it's the army that has most to gain. An army that has been linked with the very terrorists they are now trying to catch.

The ‘Kopassus’ special forces are seen by some as Indonesia's most effective response to terrorism. That's just what Indonesia's military elite wants to hear - a chance to resume their central role in Indonesian society. But it’s claimed that the military recently supported Islamic terror groups, like the Laskar Jihad, to sow chaos in eastern Indonesia, and force a new role for the army. Former President Wahid says he tried to deal with the hardline military and their militant Muslim proxies, but was simply ignored. Indeed political analyst Wimar Witoelar alleges that: “Laskar Jihad or the Jemaah Islamiah organisations were, in fact, formed with the sponsorship of the military.” Speculation continues that disgruntled elements of the military or former soldiers could even have been involved in the Bali bomb blast. In a highly suspicious move, the army – desperate to establish itself as a legitimate force - closed down Laskar Jihad just after the Bali blast. Can they now forge a credible role in a changing Indonesia? Produced by SBS Australia
FULL SYNOPSIS
TRANSCRIPT