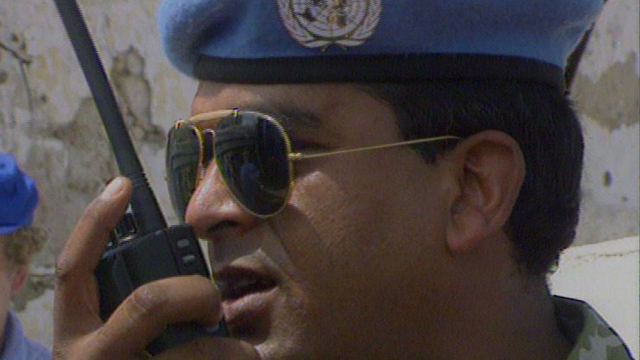 It is thought that up to 100 tonnes per day of food donated by other nations is siphoned off by guards and dockworkers in the port town of Mogadishu. Many guards lay allegiance to local gangs, and inter-gang rivalry leads to friction on the docks. It is not just casual theft either: upon leaving the port, laden lorries are often held at gunpoint and emptied of their goods.

"The problem is anarchy", says one French aid worker. "Nobody can control anybody." Her comments are certainly backed up by scenes of blatant theft, accompanied by confrontations or more often the turning of a blind eye. The stolen food is largely sold in Bakara market, Mogadishu. Starving people beg for morsels amongst the crowds, unable to afford the food that should have reached them free of charge. Abdul Karim of the United Somali Congress fears it is continuing shortages that drive this theft. "The young man with the gun, his family's starving at home... Everything's collapsed. The only means he has is the gun." In a land where the economy is in tatters, force and threats now hold the most power.
FULL SYNOPSIS
TRANSCRIPT