Merciless slaughter of animals in Zimbabwe 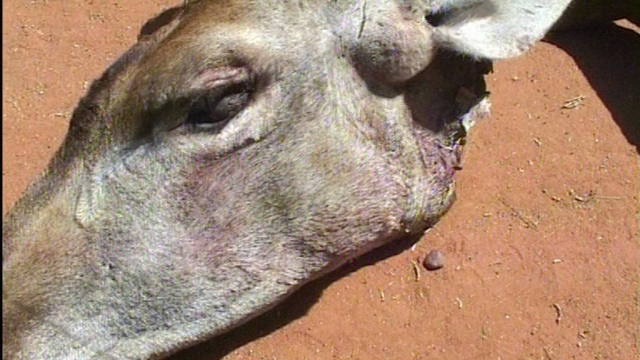 The plight of Zimbabwe's farmers awakened the world to the horrors of Mugabe's regime. However, the suffering of animals living on these farms has gone unreported. Treasured game and domestic animals are being barbarically hunted by war veterans, leaving farmlands barren and devastated. This illicit and edgy account, filmed undercover, reveals the true cost of Zimbabwe's harsh battle with its white farmers.

A giraffe lies strangled by a primitive wire garrotte, its once magnificent carcass black and rotting. "They haven't even taken the meat," despairs the farmer who found it. Back on his ranch, 75 year old Cornelius Kruger splays a gruesome array of zebra legs, metal wire and even the freshly severed head of an eland. In 2000 there were 135 giraffe on his ranch. Now there are probably less than 10. Out of the 12,500 game in this area last December, 9,500 have been poached, sold to the markets of Harare and Bulawayo. A collection of snares, planted on his land by poachers but ripped down by his game keepers, are testament to the free reign 'war veterans' have after Mugabe's land reforms. The wire for the snares comes from perimeter fences on Krueger's own farm. And it is his domestic animals that often end up in the traps. Even if they are found quickly, the loss of circulation to a leg means that the hoof will blacken and fall off. The animals, unable to be used for breeding, will have to be put down. Another common way of hunting is with dogs. A giraffe or eland is chased by a pack of lean creatures until it is exhausted. Then the poacher finishes the job with a spear - by this stage an almost empty gesture. The spears are made from irrigation systems ripped callously out of the ground. "There is no sense of maybe we'll need it tomorrow," says another farmer, Andre Fourie. The poachers also destroy vast acres of land to make it easier for them to hunt their prey. "There are thousands and thousands of tons of wood that's just been burnt away," despairs Fourie. The war veterans' callous actions has wider ramifications. Destroyed irrigation systems have left maize fields dry and cracked, struggling to produce any crop. Animals that haven't been poached die in agony from thirst and starvation. The area also has also recently become infected with foot and mouth after new settlers moved their cattle here from contaminated areas. "It's terrible. We can't go on like this," laments Krueger. These are ominous developments in a country that is already firmly in the grip of crisis. Produced by SABC Special Assignment
FULL SYNOPSIS
TRANSCRIPT