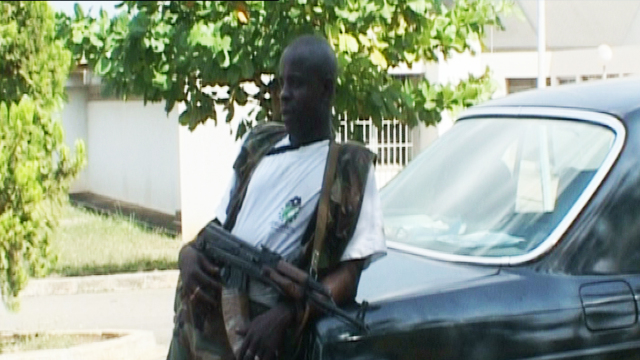 The Ivory Coast was once the pride of Africa, leading the way with its fledgling democracy and growing prosperity. Now it lies on the cusp of civil war, its economy in tatters.

A man cowers in a small hovel, too scared to reveal his face. Pro-government militia bulldozed his town, leaving him homeless. He is just one of millions displaced by the recent unrest. The Ivory Coast is ruled by the Christian south, who manipulate nationality laws to prevent their northern rivals gaining power. The government used to buy and sell the cocoa crop but the World Bank forced them to stop. Farmers were left at the mercy of international markets and millions saw their incomes plummet. Now two thirds of the population are unemployed. The people are angry and Muslims from the north, foreigners and sinister multinationals are being blamed. Those with most to fear are immigrants, who make up a third of the population. Many have been here for three generations, but are still regarded as foreigners. Now they are rebelling against the government. “Even if we have to fight against helicopters and tanks with stones and knives we will do so,” states rebel commander Cherif Ousman. He wants the government to scrap identity laws which make it difficult for northerners to vote. Unless something is done quickly, it may be too late to halt the slide towards war. Produced by Mentorn
FULL SYNOPSIS
TRANSCRIPT