Pulling bodies from a well in Angola 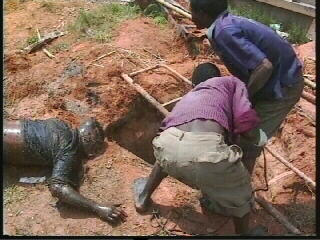 Macabre footage of corpses being pulled from a well in Huambo, Angola.

59.48 Fly-covered man's corpse lies next to men trying to pull bodies out of a well
00.40 Woman's corpse lying on stretcher
01.13 Decomposing corpse pulled out of a well and carried away
01.36 Crying, grieving woman is comforted by a friend
02.02 Bloated corpse is inspected by workers
02.28 Close up of rotten body
03.18 Flies land of corpse's head
03.38 Distressed woman clamps her head and chants.
03.46 Two women comfort each other
04.15 People gather around a corpse on a stretcher
05.40 Men lift a ladder out of the well
06.12 Gloved men undress one of the corpses
06.30 A bloody stain on the ground where a corpse lay
06.52 People congregate in the street near the well
07.10 Interview with a villager
FULL SYNOPSIS