The Iraq War protesters bussed in to save Baghdad 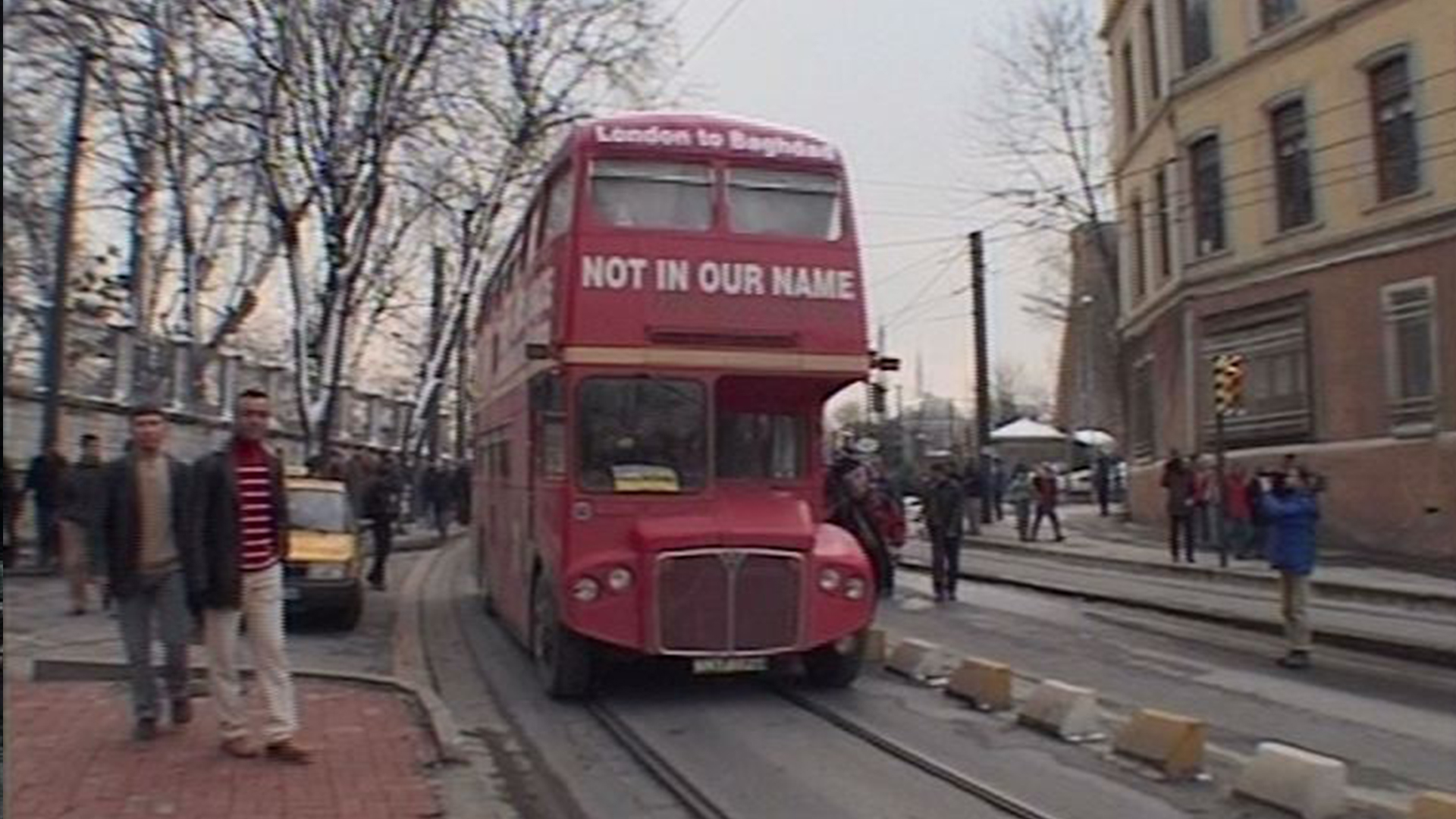 Whatever happened to the human shields in Iraq? This documentary charts how the trip which began as a mercy mission to stop a war soon descended into farce. Compelling viewing.

Ken O'Keefe renounced his American citizenship and burnt his passport after fighting in the Gulf War. Since then, he has dedicated his life to the struggle against American imperialism: "Bush is definitely lost in the darkness. The only way to stop him is to expose him for what he is." He believes that the way to do this is to act as a human shield in Baghdad: "Once Western body parts start flying, people back home are going to be really upset." The Shields aim to stand side by side with ordinary Iraqi's in Baghdad, hoping to avert the bombing by putting their lives on the line... Ken charters three London buses to transport him and his fellow activists to Iraq. Accompanying him is Godfrey, a former British Colonial administrator, Gordon, an ex Big Brother contestant and two animal activists who want to protect Baghdad zoo. With such disparate characters on board it's not long before the tensions start emerging and soon Ken's autocratic mannerisms antagonises the bus driver. When Ken's bus breaks down the convoy moves on without him, leaving him behind to get it repaired. Ken decides to abandon the bus and flies to Istanbul to rejoin the others where he his swiftly arrested by border officials. Turkey refuses to recognise Ken's 'World Citizen Passport'. "You know who I am ... it's my right to travel through this country," he protests. The Turkish authorities are not impressed and Ken is promptly deported. Undeterred, the others vow to press on: "We are all Ken O'Keefe. We are all individual human shields and we will go to Baghdad with or without Ken." However, Ken isn't giving up so easily and demands the bus route is diverted to come and pick him up. Jo, the bus driver and Ken's main rival refuses to comply, angering Ken's friends. "Anyone who supports Ken will no longer be welcome on the chartered vehicles owned and operated by Jo," complains Gordon. Finally, the bus rolls into Baghdad and the activists are welcomed by Dr Abdul Al-Hashimi of the Solidarity, Peace and Friendship society. He is also a high ranking Iraqi official and soon takes control, bussing them to hospitals to see the effect of twelve years of sanctions. "We've been shunted around on this tour and I'm not going to partake in it anymore," protests one shield. He leaves in disgust after an alleged peace conference quickly descends into a rally for Saddam. Meanwhile Jo has a nasty surprise: Ken has returned and he's determined to wrest back control of the group. "This bus trip, make no mistake about it, it was me. I was definitely in control. But it was subverted from me." However, the group's elder statesmen, Godfrey, has other things on his mind: "I've sort of blundered into this and I don't know if my courage will hold. I think we are in danger of being used as pawns by both sides." Godfrey's fears are soon confirmed. The shields are posted to defend a power plant but within 24 hours, they notice troop movement around the site. Another group is placed on a water plant near a military base. Worried that they are being used to protect Saddam's forces they demand the right to vet each site they protect. Things then turn nasty.. Dr Al-Hashimi loses his friendly face and barks: "You are in Iraq and you have to obey Iraqi rules." Ken is singled out: "Mr Ken, we are asking you to leave ... you are no longer welcome." And as the activists argue, the list for deportation grows longer, as one by one they are all kicked out or decide its time to leave.. Produced by SBS Australia
FULL SYNOPSIS
TRANSCRIPT