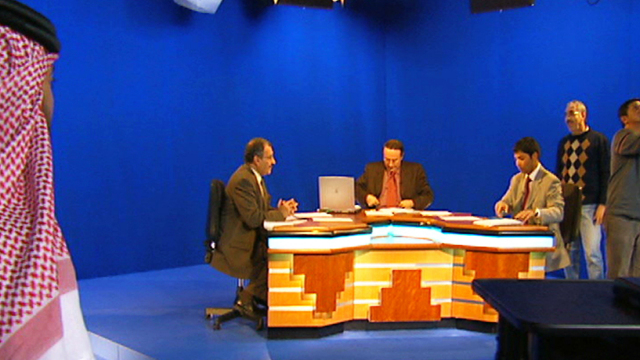 In the battle for hearts and minds, 24hr rolling news stations like Al Jazeera are more important than bombs.

In front of a barrage of US cruise missiles an al-Jazeera reporter resolutely delivers a piece to camera. ‘Still many Iraqis believe they will have the final victory despite their human fear for their own lives and the future of their children’. Ever since it gave airtime to Osama Bin Laden, al-Jazeera has gained itself a reputation among American officials as an anti-US propagandist. It is always the first to show resistance, civilian causalities or American captives. But accusations of an anti-US agenda are hotly refuted by top-rated presenter Faisal al-Qaseem: ‘Let us say that it is an exercise in democracy’ he shrugs. ‘In the Arab world sadly we don’t have political freedom. And now, thanks to al-Jazeera, democracy is the talk of the town‘. But freedom of expression seems rarely to make any friends. Al-Jazeera’s controversial discussion shows have led to it being banned at one time or another in over 15 Arab states. As violent riots erupt in Sana’a and Amman, many commentators play up Al-Jazeera’s role in Middle Eastern security. It seems freedom of speech is a luxury that suits no-one.Produced by ABC Australia
FULL SYNOPSIS
TRANSCRIPT