Life in Gaza is a constant gauntlet of Israeli sniper fire, military rockets and army bulldozers. No one is safe, least of all the children. 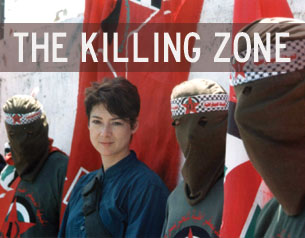 This documentary is a hard-hitting exposé of life in the occupied territories. We speak to the children caught in the crossfire and find out the true cost of Israel's targeted assassinations policy. The feeling in Gaza is that the West accepts this type of action. It doesn't matter how much so called 'collateral damage' it causes. Whichever side kills last says it is a response to the one before. In the grim calculus of this conflict, around three Palestinians die for every Israeli killed. It's an equation that keeps old hatreds fresh.

A little boy screams in agony. There's shrapnel in his eye, leg, stomach and feet. He was playing in the street outside his house when an Israeli helicopter fired missiles at the car of a Hamas member. Ten minutes later, the helicopter returned and fired two more bombs at the decimated car, spraying the surrounding district with sharp metal darts. Makmoud was just 1 of 47 people injured in the attack. Four others were killed. Israel's hardline policy may only be aimed at militants but it's the civilians who end up paying the price. 12 year old Huda Darwish was sitting in her classroom when a stray bullet from an Israeli sniper hit her. After three weeks in a coma, she is finally waking up. Her relatives' joy quickly vanishes when they realise that the bullet has left her blind. The reality of her shattered life suddenly hits her. "I want to die. Why did this happen to me?" she asks. Her family have no answers. We visit Huda's school in Rafah to see how the accident could possibly have happened. The school is run by the United Nations on a big open site not easy to miss. But an Israeli military position is situated just 500 metres away. As we enter her classroom, a shell explodes nearby. The children flee terrified under their desks. One girl is so traumatised she is in a state of shock. Their teacher says that this happens all the time.

Almost every day, Israeli troops leave their base in Rafah to bulldoze Palestinian houses. "This is a combat area," explains Colonel Pinky Zoaret. He says he needs to destroy the houses to deny the terrorists cover. But most of the houses belong to ordinary Palestinians. Thousands have lost their homes. And there's no compensation for the dispossessed. "I can't sleep," confides resident Doctor Sameer. "I smoke about 40 to 50 cigarettes a night." All his life savings are in his house but he knows he could lose it at any time. Those who try and stop the violence can end up paying with their lives. Rachel Corrie was one of them. She brought the Palestinians' plight to the world's attention when she died, crushed by an Israeli bulldozer while trying to protect a building. The IDF maintain that she died because of her own irresponsible and illegal behaviour. But eye witnesses tell a different story. "The driver could clearly see she was there," states her friend. "But instead of stopping, he continued forward." Months later, there are more high profile killings in Gaza. British photographer Tom Hurndall was shot trying to rescue a six year old girl who was stuck out in gunfire. Then cameraman James Miller was killed by Israeli fire. "James died because we trusted them to behave like a civilised army. We knew they could see that we weren't armed and that we were carrying a white flag. We trusted them not to kill us under those circumstances and they shot James anyway," states his colleague Saira Shah. Gaza still remains a killing zone. A report by Sandra Jordan for Channel 4's Dispatches and Unreported World Produced by Mentorn
FULL SYNOPSIS
TRANSCRIPT