Crimes of the Kremlin

A mind-blowing expose of political crime in Russia. We trail drug running, murder and political assassinations by the President's men, revealing the astounding campaign of terror which allowed Putin to gain and maintain the Presidency. 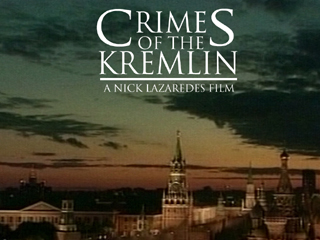 Russia's slow march towards democracy was never going to be easy. But in recent months, that process seems to have taken a step backwards. This week, we're bringing back a mind-blowing expose of political crime in Russia. We trail drug running, murder and political assassinations by the President's men, revealing the astounding campaign of terror which allowed Putin to gain and maintain the Presidency. Disturbing and pertinent viewing.

In April 2003, outspoken reformist politician Sergei Yushenkov was murdered by a lone gunman. It was Russia's ninth political killing in as many years. It was clearly not meant to be the last. Yushenkov had already been warned on television by a FSB General that he'd be dealt with if he didn't shut up, fuelling speculation that the Secret Service were behind the assassination. The claim is backed up by former agents. "Our unit dealt in extralegal murder," recalls former agent Alexander Litvinenko: "We received orders from top officials of our country to liquidate people found disagreeable." High on the list of such "disagreeable people" is Boris Berezovsky. A billionaire and media mogul, Berezovsky is widely credited with winning both the 1996 election for Yeltsin and the 2000 election for Putin. As controller of the largest Russian TV station, his editorial swayed the opinion of millions. However, after helping Putin to power, their relationship rapidly soured. Berezovsky opposed Putin's war in Chechnya and his TV station was confiscated. Trumped up criminal charges soon followed. Fearing for his life, Berezovsky fled to the UK, where he mounted a concerted campaign to expose the truth: "I want to prove Putin is dangerous - a real criminal". That his life was genuinely under threat is confirmed by Litvinenko. "He lent over to me, like that" he confirms, "[and said] 'You must kill Berezovsky. You must do it personally.'" The man ordering the murder was the deputy head of the FSB. In the course of his investigations, Litvinenko found drug lords, armed robbers and kidnappers, all protected by his superiors at the FSB. Millions of tonnes of Afghan heroin came through St Petersburg with their knowledge. When he tried to confront Putin with his allegations, he was openly laughed at. His phone was bugged, he was sacked and all the FSB officers he had reported were promoted. When he wrote a book stating he had sources close to the President, his source was murdered within two weeks. The accusations by men such as Litvinenko and Berezovsky even extend to mass murder. A massive pile of rubble and grey corpses is all that's left of four apartment buildings, the result of explosions that killed 294 in 1999. Putin, and the media, blamed Chechen rebels. The explosions were used as justification to declare war on Chechnya for a second time, securing Putin's reputation as a strong and decisive leader. But evidence indicates the bombings were in fact perpetrated by the FSB itself. After suspects in a further thwarted bomb attack turned out to be FSB agents, the FSB claimed the explosives seen by many at the scene were in fact "sugar." Such claims fly in the face of first hand witnesses and photographs. "You would not find a single serious person who would believe the story presented by the Government," opines respected historian Yuri Felshtinsky. The former director of the Russian Explosives Institute adds fuel to the fire, claiming the Institute was "involved in large scale illegal explosives trade with Russia... under the umbrella of certain Secret services." Again, when he reported his findings, he was tipped off that he would be assassinated. Putin made his name as the ruthless head of the FSB, and was seen as the perfect politician to replace Boris Yeltsin. But in a country famous for its mafia and hard-nosed attitudes, this is an extraordinary eye-opener to the deep-rooted gangster culture extending all the way to the President.
Produced by SBS Australia.
FULL SYNOPSIS
TRANSCRIPT