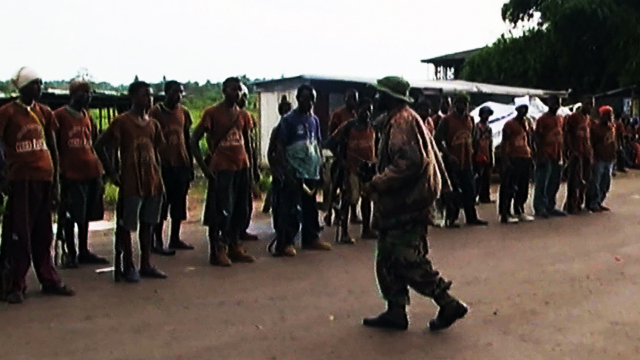 Remarkable pictures, taken with exclusive access from behind LURD lines, show the route and area now being fought over in Monrovia.

On the 25th of June 2003 a group of LURD rebels (Liberian's United for Reconciliation and Democracy) march their way 35 miles from the town of Tubmanburg south east to the edge of Monrovia. They are lead by General Cobra, their Chief of Staff, real name Seeya Sheriff, who is also interviewed at the end of the tape. On the 26th June, the rebels fight their way into central Monrovia - Cobra even has to whip younger recruits to the frontline.The rebels occupy the Duala and Freeport district of Monrovia, and battle over the bridges in central Monrovia that would lead them to the Executive Mansion. LURD rebel fighters fire over the of heads of civilian looters in attempt to stop them from stealing goods from an abandoned warehouse. Around 2000 civilians are pushed back behind LURD rebel lines and congregate in an old beer factory.

On the 27th June, General Cobra addresses his troops, and prepares for a 10.00hrs ceasefire. Government troops attack, and the LURD are forced to retreat in stolen vehicles, covering their escape with indiscriminate mortar fire.

The retreating rebals are ambushes repeatedly leaving Monrovia, but eventually manage to reach their secure frontline base of Tubmanburg. Soundbite General Cobra.

This is exactly the same route and area being fought over now inthe rebels' latest offensive.

James Brabazon (Camerapix) is the only journalist to have filmed the LURD rebels.
Produced by Camerapix Ltd
FULL SYNOPSIS
TRANSCRIPT