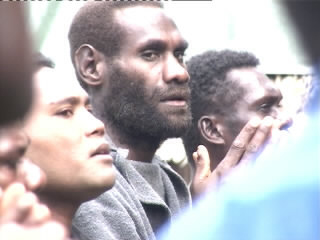 Rebel leader Harold Keke has been accused of everything from rape to mass murder. But to the people of his island, it’s the police who pose the greatest threat to law and order.

The Solomons descended into chaos after Keke launched a campaign to evict squatters from a neighbouring Island. He sees himself as a prophet, leading his people to their promised land. “We’re fighting for our rights because we don’t want the government to steal our land and resources.” Others regard him as little more than a violent thug and question his mental sanity. The stories of his victims are well publicised. However, it’s the police that the people of Keke’s stronghold of Weathercoast live in fear of. “They forced all the woman and children at gunpoint … they did all kinds of torture and harm,” recalls one eyewitness. Even the Solomons’ police commissioner, William Morrel, admits that some of his men have run amok and that it is endemic corruption that is that main cause of disorder. As one islander comments: “People have lost trust in the government and the police so they’ve given their support to Keke.”
FULL SYNOPSIS
TRANSCRIPT