Not in My Name

People from around the world journey to war-torn Iraq, to stand in the way of American bombs. 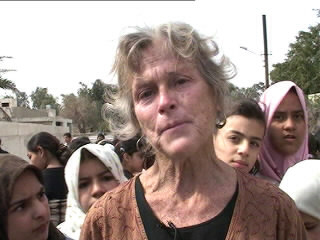 This weeks offering is an engaging new documentary about the human shields who risked their lives remaining in Iraq after the war started. Convinced that their governments' actions were wrong, they braved bombs, looters and power cuts to try and protect the Iraqi people. Now American human shields face the prospect of up to twelve years in prison for their selfless actions.

The room shakes as a bomb explodes nearby. A woman crouches on the floor, cradling her head in her hands. “Theyre bombing around us,” her friend exclaims in disbelief. “They’re bombing around us!” For the human shields still in Iraq this is the moment they’ve been waiting for. The moment they find out if they can actually make a difference and protect key Iraqi sites. The human shields movement began months earlier when three double-decker buses set off from London to travel to Baghdad. “We will be where we think they’re going to drop bombs” stated one anti-war protestor. “If you kill Iraqi people, you kill us too!” Although the majority of people applaud their decision, not everyone is supportive. “You’re a disgrace to this country, every one of you!” shouts one bystander. “Piss off and don’t come back!” As they prepare to depart, organiser Ken Nichols O’Keefe warns everyone to be wary of the media, describing them as “snakes who will stab us in the back as soon as they get a chance.” His fears are proved right when an English journalist joins them for one stage of the journey only to produce a damning report accusing them of infighting and claiming they stopped off to go siteseeing in Rome. Unperturbed they press on. As they travel through Turkey, the protesters are shocked to find themselves flagged down by police cars. They are ordered to accompany the police to the Iraqi Embassy and meet with Iraqi officials. This does not go down well with some of them. “We’re not friends of the Iraqi government, we’re friends of the Iraqi people,” complains one. A few days later they reach their final destination: Baghdad. After over a decade of sanctions, evidence of their impact is everywhere. Factories struggle without spare parts, hospital store cupboards are bare and the water purification plant, damaged during the last war, is unable to provide clean water for everyone. The shields are taken to a children’s hospital to see the impact of the allies’ use of depleted uranium in the last war. As a photograph album of deformed babies is passed around, the images prove too much for some protestors. They also give ex-marine Ken Nichols O’Keefe something to think about. He too might have been exposed to depleted uranium when he fought in the first Gulf War. “My ex wife has had three miscarriages by me and two children by another man,” he ponders. “Who knows, maybe I might have fathered a deformed child had the children who’d miscarried been born.” However tensions soon start emerging between the human shields and their Iraqi hosts. Despite being assured that they could choose the sites they protect, some protesters are concerned that the regime sees them as pawns. “It was always ‘them’ and ‘us’” reflects organiser Uzma Bashir sadly. As war approaches, they take up position near key sites. Beds, showers and toilets are installed at a power plant to accommodate them. It’s not just the allies’ bombs that pose a danger to the shields. “We had to take turns on the roof with a kalashnikov to ward off looters,” states one shield. As a pacifist, relying on weapons for protection poses a serious moral problem for him. Nevertheless, after stationing themselves in sites that were heavily bombed during the first Gulf war, the shields are pleased that the sites they protected are not targeted. “In that respect we were successful,” states Uzma proudly. “We were a thorn in America’s side.”
FULL SYNOPSIS