The definitive documentary on Mugabe's legacy in Zimbabwe 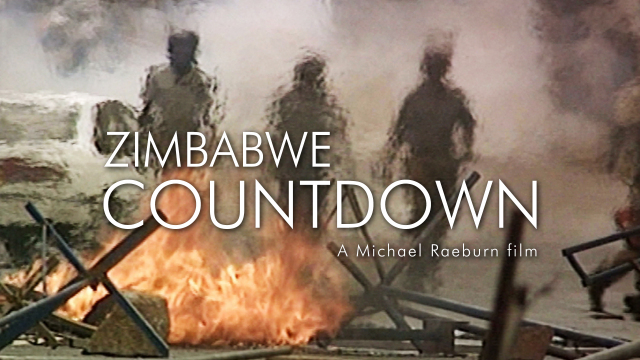 After decades in power, it looks like the reign of Robert Mugabe is finally coming to an end. Once touted as the saviour of Zimbabwe, his name has become synonymous with bad government and misrule. But where did it all go wrong? What provoked Mugabe to change from liberator to dictator? This documentary provides a personal insight into these issues. As a white Rhodesian, Michael Raeburn was forced into exile after turning against his fellow colonists to support the black guerrilla movement. He looks back at the implications of colonial rule and the crisis now ravaging his country.

Michael Raeburn has spent his life chronicling the turbulent events in his home country of Zimbabwe. In 1969, eleven years before the fall of Ian Smith's Rhodesia, he directed 'Rhodesia Countdown' supporting the African nationalists and predicting war. As a result, he was expelled from the country but in exile he published a book inspired by Mugabe's socialist vision of the future. In this latest film, made for ARTE, he details how the liberation movement he once admired has been transformed into a regime of terror. March 2002: Robert Mugabe is re-elected as President of Zimbabwe for another six years. But to achieve this, he has rigged the elections, tortured and murdered the opposition and triggered agricultural chaos and economic ruin. For Michael Raeburn, who once worked alongside Mugabe to end colonial rule, the sense of despair is unbearable: "Imagine the sense of betrayal - this is not what our fight for liberation has been about." The brutal dictator terrorising the opposition party and its supporters is a world away from the man who was once Michael Raeburn's hero. That man had pledged to "ensure there is a place for everybody in this country"; make Zimbabwe a model of a post-colonial nation. Initially, Mugabe balked at Raeburn's film about colonial prejudices, fearing "it would offend the whites." Today he lauds 'Rhodesia Countdown' as an accurate representation of colonial rule. The optimism of liberation has turned into despair. "Rage - riots - killings - starvation - doom. This is where we are today." The problems started emerging in 2000 when the Movement for Democratic Change (MDC) came from nowhere to defeat Mugabe in the referendum. It has become a mouthpiece for the urban youth who are too young to remember the liberation war. When pictures emerged of white farmers supporting the MDC, Mugabe jumped at the chance to discredit the opposition. "Here, for all to see, were his political rivals hob-nobbing with the descendants of colonists," explains Raeburn. The media was flooded with archive images of colonial repression and MDC supporters labeled stooges of the British. Land that had been seized by colonists a century earlier was to be returned to government supporters. A farmer looks around his destroyed house in bewilderment, unable to comprehend the actions of the 'war veterans'. "We're born and bred Zimbabweans ... We've got just as much right to be here as everyone else," he laments. However, in the new Zimbabwe, the white minority has been pushed to the forefront of domestic policy - used to rally Zimbabweans against the descendants of their common oppressors. It is not just white farmers who are singled out by war veterans but all supporters of the opposition - in other words 75% of the black population. Farm managers like Dave who support the MDC are also targeted. "A mob of about 150 war veterans dragged Dave away in the night ... whipped him with barbed wire and left him for dead," describes Raeburn. Today the world looks elsewhere as the government of Zimbabwe eradicates all opposition. Millions starve as chaotic land distribution triggers economic ruin. And Michael Raeburn has been forced into exile a second time. "I've fought racism all my life, yet now I'm an enemy of the people through the colour of my skin!" Director: Michael Raeburn
TACT Productions for ARTE Winner of the "Signis International Jury Award" at the Cape Town World Cinema Festival
FULL SYNOPSIS
TRANSCRIPT