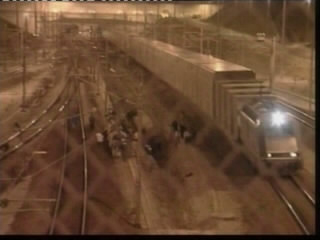 The French authorities are attempting to halt the flow of asylum seekers on their way to Britain.

Calais is the staging post for numerous attempts to cross the channel by asylum seekers. They are being offered temporary visas by local police if they promise to leave Calais.  The police are keen to see them go and resort to harassment to get their way. Locals believed to be assisting the asylum seekers also face arrest.  A volunteer wishes he could do more to help. "If I had the means to help someone I'd do it without qualms. It may be illegal but it's humane, " he states.  Yet the police believe that this kind of attitude supports a network of "people smugglers and mafia networks." But for most of the refugees, the goal of reaching Britain remains imperative.
FULL SYNOPSIS
TRANSCRIPT