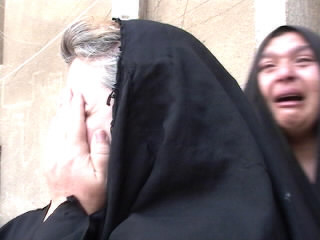 News from Iraq continues to dominate the headlines. But the voices of the Iraqi people are strangely subdued. This week's insightful documentary tells the tale of the group of young Iraqis who decide to start an independent newspaper. They soon find themselves tackling some of the toughest stories on the streets of Baghdad, investigating everything from the state of the country's hospitals to why young children are being raped in broad daylight. This moving documentary illustrates some of the problems of life in a war torn country.

We made this newspaper to be a voice for Iraqis," declares Waleed. Despite having grown up under Saddam's strict censors, he is determined to report all stories accurately. But the odds are stacked against him. The Americans won't allow the Iraqi journalists to access bomb sites open to Western reporters and their requests to interview spokesmen repeatedly fall on deaf ears. Despite these setbacks, the young journalists refuse to be dissuaded. From the very beginning, they address important issues, tackling stories international journalists struggle to source. Most potent are the stories from the streets. Hamsa reports on the victims of Baghdad's ailing security system. She interviews a nine-year-old girl who was raped in broad daylight. No one intervened to help because the man was armed. Now the hospitals are refusing to treat her because she cannot obtain a victim report from the police stations as they are all closed. "There's no police station, there's no government, what about human rights?" Hamsa despairs.

Meanwhile her colleague, Salam Al Jabouri, decides to investigate the treatment of burns victims in Iraqi hospitals. With medical supplies dwindling and wards full to bursting point there is simply no place to treat the new victims. But because the telephone exchanges were all bombed during the war, the hospitals cannot communicate with each other and badly burned patients are simply shunted around from one hospital to the other. As the long hot summer progresses, tensions build on the streets. The bombing of the Jordanian embassy was just a taste of things to come. Through the eyes of the group we see the gradual deterioration of relationships between US troops and Iraqis. Faisal comes across soldiers shooting randomly in the street after driving onto a landmine. The removal of sanctions brings unexpected imports to the groups' attention. Waleed is approached by a British business man eager to promote his Tayser gun. He claims his gun will "help the Iraqi Police", but the group is not convinced. They know all too well the dangers of giving electric shock equipment to the Iraqi police force. The question of Saddam's whereabouts remain on everyone's lips. Waleed visits the cafe where the Ba'ath party was formed and most of the revolutionary actions were planned. An ominous tape recording of Saddam's voice is suddenly heard on the TV and the cafe's crowd listen nervously. Faisal decides to investigate the bombing in Najaf of Hakim, the prominent Shia leader, where huge crowds call for revenge for their leader. Faisal soon finds evidence of a Wahabi attack, from a local eyewitness. Narration by the film maker Julia Guest introduces Baghdad before the war and during the bombing, and takes the viewer through the story of post-war Baghdad with these young journalists. Directed by Julia Guest