Dealing With the Devil 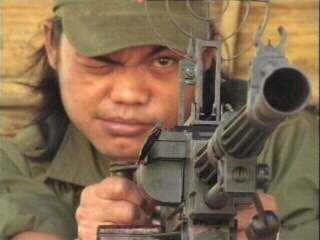 Burma's military junta are on the verge of signing a peace deal with the ethnic Karen which will leave Aung Sang Suu Kyi increasingly isolated.

After decades of war, Burma's generals have finally begun talking with their oldest foe. "Surrender is out of the question and we will retain our arms," states Karen Colonel Ner Dah. But in exchange for recognition and self-government, they are prepared to drop their demands for full independence. Getting the Karen to sign up to such a deal would be a huge achievement for the generals. Despite decades of persecution, the Karen have never wavered in their resistance to the Burmese regime. Not only would this deal pacify one of the junta's most implacable opponents but it would also help legitimise their regime and further isolate Burma's most popular opposition leader, Aung Sang Sui Kyi.
FULL SYNOPSIS
TRANSCRIPT