Women on the Frontlines

Women are more likely than professional soldiers to be the casualties of war. From genocide and rape to displacement and starvation, they bear more than their fair share of the suffering. This is their story. 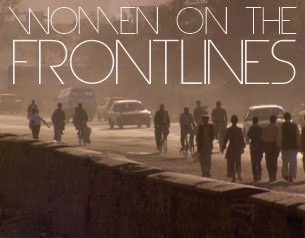 Women are more likely than professional soldiers to be the casualties of war. From genocide and rape to displacement and starvation, they bear more than their fair share of the suffering. But amongst all this hardship, women around the world are standing up for peace. By advocating justice and educating future generations that war is not the answer, they are at the forefront of reconciling their communities. This high-quality documentary made for PBS follows women peacemakers from four different conflict zones. Narrated by Academy-Award winning actress Jessica Lange, this film redefines the role of women in war.


Fides will never forget the day she nearly died. When civil war was raging in Burundi, she begged her neighbour to protect her. "The women opened the door and locked me inside. Then the killers came to look for me but she refused to open the door." Undeterred, the killers broke into the house and attacked her with machetes. She would have died had her neighbour not summoned medical aid and nursed her back to health. "For generations women have served as peace educators, both in their families and in their societies. They have proved instrumental in preserving social orders when communities collapsed," declared Kofi Annan. A century ago, only 15% of all casualties of war were civilians. Now that figure is closer to 90%. But women's role in warfare is not merely restricted to that of victim. From Afghanistan to Argentina, they are leading the movement for change and reconciliation. More than two years after the Taliban were ousted from power, violence and intimidation again threaten women in Afghanistan. Girls' schools have been attacked and children harassed on their way to class. Naheed Sharfi knows the dangers more than most. She risked her life to educate girls under the Taliban. "She was very, very brave," recalls NGO worker Mary MacMakin. "She continued on with her work even though the Taliban were following her." Now she runs a school teaching 300 girls to read and write. It is women like her who are playing a greater part than anybody in bring Afghanistan into the modern age. Ending conflict through education is also one of the goals of radio director Jeannine Nahigombeye. Her country of Burundi was devastated by the ethnic cleansing of the 1990s. "At one time people said that the life expectancy of a Burundian was 24 hours," recalls journalist Specs Manirakiza. With the genocide encouraged by hate radio stations, Jeannine decided to found her own radio station dedicated to combating hate. "By giving information in a country at war like Burundi we truly discourage rumours," she explains. But women's roles in conflict resolution is not merely restricted to that of educators. Fatima Gailani fled her homeland of Afghanistan after the Soviet coup. Now she has returned to help forge her country's new constitution. Similarly, Argentinean political candidate Elisa Carrio decided run for office after corrupt politicians were widely blamed for the collapsed Argentinean economy. "Argentina has become a country where everybody steals and people are shocked by honesty, especially in the government," she complains. At all levels, women are participating in the rebuilding of their countries. Mico-credit company Women for Women specialises in providing financial support for women in post-war countries. As well as helping women set up their own businesses and provide for their families, the loans also enable women to reach positions of power and influence. The personal stories of these characters demonstrates the resilience and courage of women worldwide. Their pragmatic approach to conflict resolution is challenging traditional notions of building peace.
FULL SYNOPSIS
TRANSCRIPT