Pawn of the Pacific 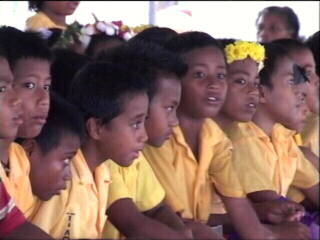 The issue of Taiwan's sovereignty has fuelled a Pacific Cold War. Both China and Taiwan stand accused of using bribery and political interference to secure UN support.

Until recently, the tiny Pacific island of Kiribati was one of China's staunchest supporters. But then the Taiwanese persuaded it to switch camps, sparking accusations of bribery and corruption. "Taiwan was heavily involved in the last elections in Kiribati by giving money to individuals and to particular parties," alleges former President Teburor Tito. He claims he was repeatedly approached by Taiwanese agents, offering incentives in exchange for official recognition of Taiwan. But President Tong believes that these allegations are part of a Chinese campaign to destabilise his government: "I have no doubt that they will continue to undermine my government in order to be able to get back into Kiribati." He also alleges that the Chinese bribed previous government ministers. For the Chinese it's not just their anti-Taiwan policy that is at stake. Kiribati also houses their satellite tracking system, believed to spy on America's Missile Defence Shield tests. With so few natural resources available in Kiribati, politicians have little option but to exploit China and Taiwan's interest.
FULL SYNOPSIS
TRANSCRIPT