Good Spirit of the Old Bridge

The Mostar Bridge is representative of peace and happiness for many Bosnians. This haunting story captures the nostalgia of a generation. 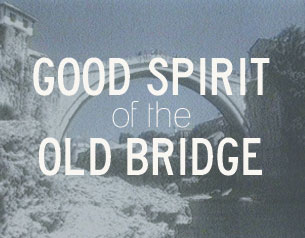 Arching high above the River Neretva, Mostar’s famous and imposing Old Bridge has long captivated the town’s inhabitants. Spanning the gap between its ethnically diverse population, the bridge stood as a symbol of peace for Serbs, Croats and Muslims alike. Then in 1993 a Bosnian Croat tank shelled it, bringing it crashing into the river below. Since then, a massive operation to re-build the bridge has dominated life in Mostar. This haunting film gathers the thoughts and memories of those seeking to recapture the good spirit of the Old Bridge.

Every year, hundreds of fans and tourists have gathered alongside the banks of the river to witness the famous diving competitions. Head first, feet first or swallow like; from over thirty metres high the men have plunged to the shallow waters below. Emir Balic was Mostar’s Champion Diver. The bridge was an integral part of his life. “We thought of the old bridge as if it we’re a living being – like some old man who should be respected,” he remarks nostalgically. Known for his bird like grace, Emir is hailed as champion of them all – and he hopes to dive again from the new bridge. Proof of Emir’s love for the bridge is obvious. His small room is covered in photos of the bridge - as a cameraman, he has devoted as much time capturing it on film as diving from it. “ I would always film the Old Bridge, trying to find some new angle, some better way to film it, but I was never satisfied.“ Yet when he screens his beautiful 16 mm footage of the bridge and the divers, his audience is held captive – the younger generation vowing some day to inherit the tradition of their forefathers. With plans to finish the ‘New Old Bridge’ by 2004, architects, engineers and builders have all joined forces to restore it to its original splendour. “I was in a camp when the bridge was destroyed and I swore that I would work on its reconstruction,” says an old architect. Like many in Mostar, he is also a diver - but a scuba diver, and he is able to use his knowledge of both the bridge and the river below to locate many of the original limestone blocks which belonged to the bridge. Others have been inspired to learn the trade of their grandfathers in order to participate in the process. “I felt the urge to work with the same stone that was used in the bridge and I started to work in the old quarry that belonged to my granddad” says Jure Krtalic. With meticulous precision he prepares the stone so that it is of highest density and quality possible. They must match in quality the original 140 limestone blocks that have been recovered and that will reappear alongside the new. Of no strategic importance, the shelling of the Bridge was ordered purely because it was the symbol of an ethnically diverse community. Mostarians feel the death of those defending the bridge is significant. “Death has nothing to do with nationality. Amongst those who got killed were Serbs and Croats; our nationality never divided us” states Emir. The outcry that followed the bombing of the bridge caught the attention of the world. The International Olympic Committee have since pledged to become the diving competition’s official sponsor. It is hoped that their involvement will also bring about a more general reunification of the sports in Bosnia and Croatia. The celebrations planned for when the Bridge is finished will, of course, involve some diving. And there is only one candidate to be the first to leap. “ I believe that Emir Balic, Champion Diver , will be the first to dive” exclaims one enthusiast. And if he does, it will be his 1001st! ‘Good Spirit…’ is a nostalgic tale about ethnic unity, in a region that has suffered some of the worst racial divisions in living memory.
FULL SYNOPSIS
TRANSCRIPT