The Good Samaritan Children's Home in the slums of Nairobi is little more than a shack. There's no water or sanitation and it's staffed entirely by local volunteers. But for the children of the slums, it's their only refuge. 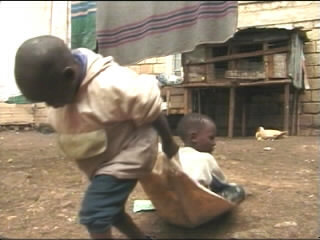 This week's documentary is a fly on the wall account of life in an African orphanage. The Good Samaritan Children's Home in the slums of Nairobi is little more than a shack. The walls are made of corrugated iron, there's no water or sanitation and it's staffed entirely by local volunteers. But for the children of the slums, it's their only refuge. We follow the children over a period of a week as they go to school, play in the street and reflect on their lives. This character-led, classic documentary provides an intimate portrait of life in the orphanage.

A little boy shivers with cold. He's standing on a stone slab in the orphanage's courtyard covered in soap. But he can't finish washing until his two friends return with a bucket of water. In another section of the courtyard, children are passing round a bottle of water to brush their teeth and a volunteer is gently cutting a boy's hair. It's just a typical morning at the orphanage. The Good Samaritan Children's Home was founded by 'Auntie' Thuo after children began living in the streets in her neighbourhood. Facilities are basic: the home can barely care for all its children and staff are overburdened. But the children help out whenever they can. Older orphans protect the younger ones and the children entertain themselves. "We don't have shoes but we'll play football as if we had good shoes," they state proudly. The children know that, were it not for Auntie, they'd be living on the streets. Most of them are AIDS orphans. After their parents died, they slipped through the net of Kenyan social services and ended up on the street. "Life on the streets in so hard," declares 15 year old Chalo. "No one to look after you, to feed you, being rained on..." He lived in the slums for over a year, sleeping under cars and scavenging food from bins. His friend Boss spent three years on the streets. Years of sniffing glue have left Boss permanently brain damaged, leaving him with few prospects. While Boss, Chalo and the other children play outside, Ochieng languishes in bed. He has typhoid and hookworm and is too weak to move. "I'm dying," he whispers to his sister. The orphanage hopes that the paracetamol prescribed by the local doctor will cure him. Instead, this treatment nearly kills him. His older sister is beside herself with worry. After their parents died they were left alone together. Then she started smoking drugs and working as a prostitute while he sought sanctuary at the Good Samaritan. Although AIDS is omnipresent, most people have scant understanding of the disease. "They don't know what AIDS is," states Helen, one of the volunteers. "They think maybe there's an evil spirit causing the sickness." Even teenagers like Chalo are reluctant to use condoms. Instead he believes that Christianity will protect him. But as AIDS continues to ravage the country, many traditional beliefs and practices are slowly dissolving. Religion is struggling to provide answers to this new problem, creating a deep sense of uncertainty. The Good Samaritan is one of several makeshift orphanages in Nairobi trying to provide an African solution to the country's problems. But children at other homes are often in as much danger as if they were on the streets. At the end of the week three new girls arrive at the home. Auntie has been asked to care for them because their previous orphanage was being run by a paedophile. They have been sexually abused and now have venereal diseases. The youngest is just six. But Boss soon takes the girls under his wing, proudly showing them around. The lives of the children at the Good Samaritan children's home lays bare the complicated relationship between disease and poverty, religion and tradition. Through the eyes of the children, we gradually come to understand their world. VHS and DVD Sales not available to North America
FULL SYNOPSIS
TRANSCRIPT

Randy Bell Orphans of Mathare is Randy Bell's third documentary film. The Academy of Motion Picture Arts and Sciences recognized his first film, Look Back Don't Look Back (made with Justin Rice), as an "Outstanding documentary from 2000." The film won Best of Festival at the New England Film and Video Festival (2000), Best Short Documentary at the Cleveland Film Festival (2001), and Best Documentary at the Ivy Film Festival (2001). His second film, Modest Scarring, won the Hoopes Prize for Outstanding Academic Achievement at Harvard University and the Chairman's Award at the Ivy Film Festival (2003). It premiered at the Boston University American Studies Film Festival and is currently on the festival circuit. Pacho Velez Orphans of Mathare is Pacho Velez's second documentary film. His first film, Occupation (made with Maple Razsa), won Best Documentary at the Ivy Film Festival (2003) and screened at festivals in North America, Europe, and Asia. The film played for a week at the Pioneer Theater in New York City and has screened at the George Eastman House and Boston's Museum of Fine Arts. Segments of the Occupation appeared on The Oprah Winfrey Show and on an A&E special on low-wage workers in America. Additionally, the film toured college campuses and union halls as part of an AFL-CIO and United Students Against Sweatshops effort to raise awareness of living wage issues.

For six weeks during the summer of 2001 Randy and Pacho filmed at the Good Samaritan Home and in the surrounding slum. The horrors they documented are not only medical, but social and cultural as well. HIV/AIDS threatens to create a generation of children without parents or homes, growing up to be drug-addicts and thugs, alienated from their traditional family structure, their culture and their history. To fully understand the fallout of HIV/AIDS, we realized our film needed to focus on more than the disease; it had to understand a culture in crisis. Since shooting "Orphans of Mathare" much has changed in the lives of many of the children at the Good Samaritan Home.
Boss and Chalo, two of the children at Good Samaritan, are now two and a half years older. Chalo recently entered his third year of secondary school. Boss didnt pass his primary school exam  the glue he sniffed while on the street permanently affected his brain  and he still lives at Good Samaritan with few prospects for the future. Once best friends, life is starting to take these adolescents down diverging paths.