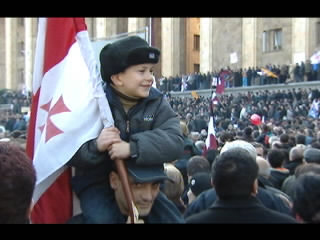 After the dramatic 'Rose Revolution' that saw him to power, will Saakashvili be able to unify his country?

The hardest tasks still lie ahead. Vast swathes of the country are outside his control. Having claimed independence, they answer to no one. Everywhere you turn in South Ossetia are signs of Russian influence. The police and soldiers wear Russian uniforms, cars have Russian numberplates and the region even runs on Russian time. But technically South Ossetia is part of Georgia. Saakashvili is doing his best to win back their support but any invasion would surely be bloody. "In the case of aggression, volunteers from the whole North Caucasus will be here to fight," states one Ossetian. The Northeast region of Abkhazia also operates as a separatist state. To unify his country Saakashvili will need to tame both regions. But how will he be able to do this without resorting to violence?
FULL SYNOPSIS
TRANSCRIPT