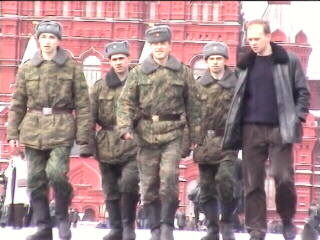 For Chechen civilians, Russia's 'clean-up' operations amounts to little more than genocide. Even Russian soldiers condemn their actions in Chechnya.

When Ivan volunteered to fight in the second Chechen war, he had scant understanding of what he would experience. Even now, he remains deeply troubled by his time there. Lack of supplies and widespread alcoholism fuelled acts of brutality. His ill equipped unit had little choice but to rob civilians. "We had to feed ourselves. Of course we turned to looting. Of course we'd kill," he says. He believes the Chechens are being forced into acts of terrorism out of desperation and revenge. "We'd come in the house and kill five people - one survives, they have nothing to live for and it becomes blood for blood." 60 year old Sowdat has seen two of her children killed by the Russians. Another two have disappeared without a trace. "It's genocide and it's conducted openly," states Rusen Badalov, of the Chechen Salvation Committee. Despite Putin's assurance to the contrary, Chechens believe that a bloody war is being waged against them. Daily 'disappearances' in every village tell the same story. It seems that Russia's campaign to impose order is creating the terrorism they mean to crush.
FULL SYNOPSIS
TRANSCRIPT