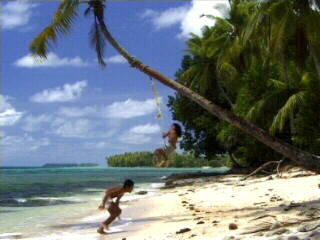 Largely unknown to tourists, Tuvalu and its 10,500 people suffer from underdevelopment and a lack of jobs. Other than fishing, people get by harvesting coconuts - pretty much the only thing the soil will grow. But Tuvalu has one valuable asset: its coveted domain name - dot tv. In 1999 the prime minister determined to capitalize on this by selling the name to a Los Angeles dot.com company - in exchange for several million dollars and access to the new wired-up world.
FULL SYNOPSIS
TRANSCRIPT