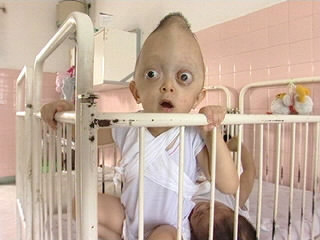 The use of Agent Orange during the Vietnam War means that for many the war never ended. They're still suffering the effects of chemical warfare.

"I try hard to improve our life but we cannot," sobs Mr Quy. His stomach, liver and lungs are riddled with cancer and the hospital refuses to treat him. Now he's too weak to care for his severely handicapped children. He believes it was his exposure to Agent Orange during the war which blighted his family. His only hope is that the law suit against the US companies who manufactured Agent Orange will succeed. But many are angry that it's taking so long to receive compensation. As the Head of the Association for Victims of Agent Orange states: "The Vietnamese people have suffered but unfortunately, the Americans have avoided their responsibility." (ABC Aus)
FULL SYNOPSIS
TRANSCRIPT