Terror suspects are being sent to countries in which torture is commonplace in order to encourage admissions of guilt. We investigate in this hard hitting, revealing documentary. 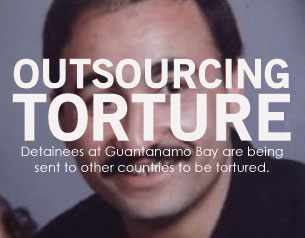 Detainees at Guantanamo Bay are being sent to other countries to be tortured.

Are prisoners at Guantanamo Bay being severely tortured? As more and more former inmates speak out, evidence of this is stacking up. Whilst America may have signed the Convention against Torture, many of its allies in the War on Terror haven't. And by sending detainees to these countries for interrogation, the US is able to gain intelligence obtained through torture whilst at the same time keeping its hands clean. This week's documentary is the shocking story of one such case. It's the tale of Mamdouh Habib, arrested in a general round up and sent to Egypt for six months to be tortured. When Tarek Dherghoul met Mamdouh Habib in the hospital wing at Guantanamo Bay, he could tell there was something seriously wrong with his new neighbour. "He was very confused. Dazed. Weak. He spoke very slowly in riddles. Telling me stuff about how he'd been taken to Egypt." Tarek eventually learnt all that had happened to Mamdouh in Egypt. "He told me he'd been electrocuted, put in water, stripped, punched. He said something about a dog being put on him when he was naked. Cigars put out on his body." There is little doubt that Mamdouh was seriously tortured in Egypt. Even the former Minister of Justice of Qatar confirms this. "He was interrogated in a way which a human cannot stand ... He was really beaten, really tortured." By the end of his incarceration, he was willing to confess to anything. But why was Mamdouh arrested in first place? And why was he sent to Egypt? According to his family, he went to Pakistan in September 2001 looking for potential business opportunities. When he was found in the restricted province of Baluchistan without the correct visa documents, he was arrested and handed over to US custody. Although he was an Australian, his family originated from Egypt so few questions were asked when the US transferred him there. "They took him to Egypt firstly because it was convenient because he was born in Egypt and because they knew he'd be tortured there," states his lawyer, Stephen Hopper. Even the Pakistani Interior Minister confirms that Egypt did not request his extradition and that he was sent there under American orders. Mamdouh Habib is not the only American prisoner to be sent to another country for torture. There are dozens of other documented cases. America even works closely with local interrogators to ensure prisoners are asked the correct questions. "The United States would prepare memos for the Egyptian authorities that include the type of information required from such persons. The Egyptian authorities would then interrogate these people and supply the Americans with information about them," states leading Islamic lawyer, Montaser al-Zayat. Thousands of other suspects are believed to have been picked up and interrogated purely to provide intelligence for the Americans. According to Tarek Dherghoul, US interrogators often used rendition as a direct threat. Prisoners are warned that if they don't co-operate fully, they'll be sent to Egypt or Syria to be tortured. The US State Department claims that renditions are a key counter-terrorism strategy. "George Tenet testified to that fact. He said it's a policy of the United States. They use it and they've used it effectively and they're proud of what it achieves," states Steve Watt from the Centre of Constitutional Rights. But the Arab world regards renditions as the deliberate outsourcing of torture to give the US some deniability. And many lawyers are worried. "What this is is state-sponsored abduction and that's a violation of international law," states Steve Watt. "We believe that Mamdouh was sent to Egypt for the express purpose of interrogating him under torture." Three years after his arrest, Mahdouh Habib is still imprisoned in Guantanamo. His mental and physical health have severely deteriorated and he has still not been charged with any crime.
FULL SYNOPSIS
TRANSCRIPT

Bronwyn Adcock came to Dateline in 2001 after spending a year living overseas, including time studying Farsi in Iran. Before that Bronwyn was with the ABC for 5 years, working with the AM, PM and The World Today Programs. She also had stints at ABC TVs Four Corners, the Canberra Press Gallery and Radio Nationals Background Briefing program. In 1997 Bronwyn received the inaugural Andrew Olle Scholarship and shes twice been a finalist in the Walkley Awards. Bronwyn has reported from Papua New Guinea, Laos, the UK and most recently for Dateline from Zambia and Hong Kong.