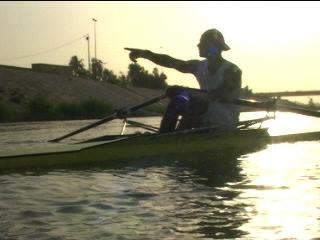 For athletes in Iraq, pursuing the Olympic dream is virtually impossible. They're training for Athens against a backdrop of chaos and destruction.

"For a sportsman, training in an area like this is psychologically devastating," states Iraq's top rower, Haidar Nowzad. Only a brief stretch of river is safe enough for him to train in, his boat was looted by criminal gangs and his rowing club has been taken over by Americans. As he trains, a body is pulled out from the river behind him. Despite these problems, he practices every day desperate for a place in the Olympics. Sprinter Alaa already has a place at Athens. But she knows she stands little chance of success. Forced to run amidst rubbish and bombed out buildings she's training in conditions no other athlete would dream of enduring.
FULL SYNOPSIS
TRANSCRIPT