We look back through forty years of violence to place modern day Algeria in its proper context. A high-quality look at one of the world's forgotten conflicts. 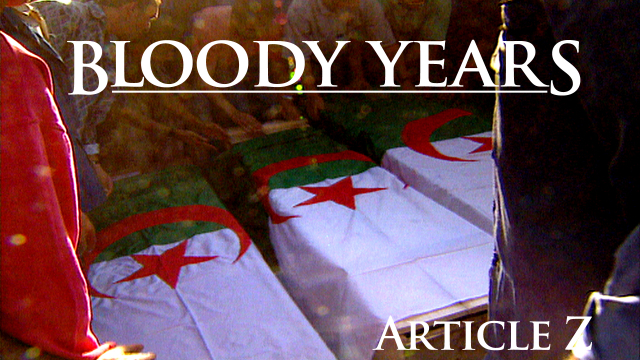 Algeria's history is dotted with bloodshed. Hundreds of thousands of people have been massacred in the decade long civil war between Islamic militants and the Algerian Army. Even now unrest, militancy and kidnapping characterise the country. It's still more or less a no-go area for western journalists. But why is Algeria so troubled? This week's documentary is a beautifully filmed production getting to the root of Algeria's problems. We look back through forty years of violence to place modern day Algeria in its proper context. A high-quality look at one of the world's forgotten conflicts.

"Why did our children die? "Why is our country like this?" despairs a grieving mother. Her daughter and 27 others had just been killed in a small village in Western Algeria. Virtually every family in the country has been touched by the violence. Algeria seems trapped in a never-ending cycle of bloodshed. But it's impossible to understand what's happening there today without first understanding Algeria's history. When Algeria gained independence, its citizens hoped their struggles would finally be over. But the independence movement quickly transformed itself into a corrupt dictatorship. Soon they were the only political party allowed. The economy collapsed and people lost all hope in the government. By the late 80s, the situation was spiralling out of control. Labour strikes paralysed the country and riots broke out in the capital. Then, the army of liberation turned their guns on its own people. Around 500 were killed and thousands arrested and tortured. One victim recalls being electrocuted: "They'd throw water over us to act as a conductor. Then they beat us with a stick and kept increasing the current." But the repression only made people more determined to keep pushing for change. Finally the authorities were forced to capitulate. For the first time since independence, free speech was allowed. Instead of one political party, there were now 60. The Muslim fundamentalists, who had become ensconced in poorer areas, came out of hiding. They formed a political party and dedicated themselves to the introduction of Sharia Law. Soon, they were calling for holy war. "We will fight for an Islamic state. We will die for it!" declared leader Ali Belhadj jr. In the first round of free elections, the extremists polled 60% of the vote. Fundamentalists were confident of victory and looked forward to the new Islamic Republic of Algeria. But the army had other ideas. "A second round would have meant an Islamic State or a real civil war. One way or another, a solution had to be found," explains politician Ali Haroun. The army called a halt to the elections and a state of emergency was declared as soldiers hunted down fundamentalists. At least 10,000 ordinary civilians were arrested and sent to prison camps. But these camps became breeding grounds for terrorism. "When you're in a camp, suffering oppression you start to get ideas," explains former prisoner Ouziala. "Many in the camps became guerrilla fighters afterwards." Then a new Islamic group, appeared on the scene and started carrying out acts of terrorism. The authorities met violence with more violence and it became impossible to tell who the real perpetrators were. "We're disgusted by the government. We've got nothing," complains one Algerian. In the aftermath of September 11, the authorities found their new anti-terrorism struggle had the support of major western governments. The violence still continues as the extremists and the government fight each other. And more than 40 years after independence, the people of Algeria are still not free.
(Article Z)
FULL SYNOPSIS
TRANSCRIPT