A powerful and intelligent documentary searching for answers to the horrors that occurred in Bosnia. 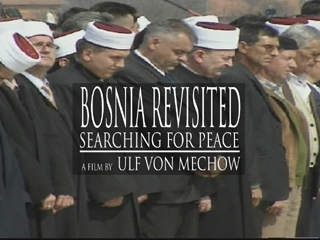 A powerful and intelligent documentary searching for answers to the horrors that occurred in Bosnia. Since the onset of that war journalist Ulf van Mechow has been travelling to the region. But how is Bosnia coping 8 years on? Are attitudes finally changing? How is the country coming to terms with the terrible levels of violence it endured? Made for ARTE.

Drawn, emaciated faces stare out imploringly from a warehouse in Manjiaca. This terrible footage is burned onto the minds of everyone who saw it - evidence of the worst case of European ethnic cleansing since the second world war. "In the first 3 months this was a hunger camp. People were left to starve," recalls former detainee Adil Draganovic. Potocari, Sanski Most and Srebrenica became bywords for mass genocide as Milosevic attempted to restore ethnic purity in the Balkans. Eight years on the Bosnian war may have ended, but the search for answers continues. Mass graves are still being uncovered, and moves are being made to restore some semblance of dignity to the victims. At the 'People Identification Project' storage rooms, countless bodies wait to be identified and moved from the ignominy of a mass burial to individual, marked graves. At the burial ceremony for the first 600 victims, UN High Representative Paddy Ashdown expresses the feelings of all Bosnians: "We must be sure, that such crimes are never again repeated." For many of the victims, only the prospect of justice offers hope for the future. At camps like Omarska, women were brutally raped, both to dispirit the Bosnians and motivate the soldiers. It was here that Nusreta Sivac and countless others suffered several months of beatings and rape. She braved her demons to testify at the International War Crimes Tribunal in the Hague. Although "It all comes back again in the courtroom - what you lived through, what you saw, what was done to you," her bravery helped indict rapists and inspired other victims. In the Bosnian Serb capital of Banja Luka, life today appears to be returning to normal. During the war, Bosnian Mosques were blown up, while Muslims were either murdered or driven out. "90 percent of my population fell victim to ethnic cleansing", recalls local mufti Halilovic. But now 10,000 Muslims have returned to the city. However the effects of Serbian nationalism continue to be felt. When the corner stone of the destroyed mosque was re-laid, full scale riots erupted amongst the Serb community.

BOSNIA REVISITED eloquently paints a picture of a traumatised society, still with a deep undercurrent of anger. Many Serbs can't yet face up to the wrongs their nation committed. But as the lyrics of Serbian songwriter Djordje Balasevic's proclaim: "Only the insane can feel happy, while others live in shame." It typifies a new self awareness within Serbian culture could yet be key to a fully committed partnership in the fragile peace.