Between War and Peace 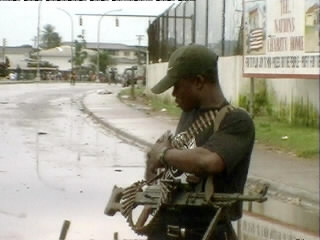 After fourteen years of anarchy, the international community is helping to stabilise Liberia. But how does a country move on after so many years of war?

"The economy is totally destroyed ... Monrovia is still a city of a million people without water or electricity," explains UN special representative Jacques Klein. But the most difficult task the country faces is rehabilitating its traumatised child soldiers. "These children have so much sorrow, so much hurt inside," states children's worker Josephine Tengbeh. "We have to detraumatise them, we have to counsel them, we have to make them feel at home." But in a country where half the population live in displacement camps and many people have lost contact with their families, it's a huge challenge. However, the UN sponsored disarmament process is achieving results. Now the priority is to sustain the peace and rebuild the country so that Liberians can finally have a future to look forward to.
FULL SYNOPSIS
TRANSCRIPT