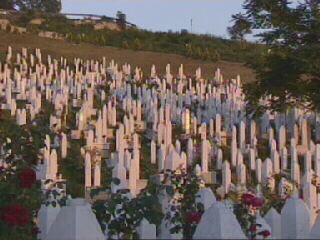 A decade after the Balkans war, the guilty are still evading justice. Many war criminals are not only free, but living side by side with their victims.

"There are so many guilty and yet so few sentences have been given," laments Zineta Hodzic. Her husband and 16 other Muslim men were abducted by Serb paramilitaries, tortured and killed twelve years ago. It was one of the few war crimes that ever came to trial in Belgrade. But the trial was a farce. Only two of the twelve kidnappers were imprisoned and many of the abductors were not even charged. They live nearby and Zineta regularly sees them. The Hague War Tribunal was set up to try only the top political and military leaders. The other 20,000 war criminals were supposed to be tried in local courts. But that's unlikely to happen. In Serbia there's little will to indict thousands of petty war criminals, while the masterminds, like Radovan Karadzic and Ratko Mladic are regarded as national heroes and protected by the authorities. "There was direct collusion to prevent them being caught between the intelligence services, the army and the government," claims UN High Commissioner Paddy Ashdown. Even at the Hague, there are now fears that Slobodan Milosevic will be found not guilt of genocide. (ABC Aus)
FULL SYNOPSIS
TRANSCRIPT