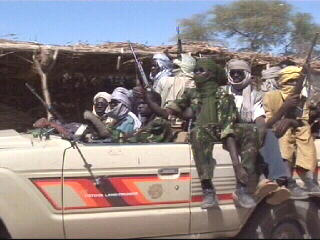 The rapists and ethnic cleansers of Darfur are still at work. Threats and three UN resolutions have changed little as the world's worst humanitarian crisis deteriorates.

The African Union's monitors in Darfur are getting busier by the day. Attacks have increased threefold since September. "Government bombs did this," says a villager, gesturing at the charred landscape. The bombs killed four locals, injured 17 and incinerated seven compounds. It was an act of war, but one provoked by rebels to make the government look bad ahead of forthcoming peace talks. Many parts of the country are now too dangerous for aid agencies to operate in. Since last week an additional 360,000 people have been cut off from food aid and refugee camps in all three provinces have been attacked. "No security, no medicine, no food, nothing," despairs one refugee. Those who look for food run the risk of being raped or attacked. "They took us one by one behind the hill. Then they raped us. Now I have pain all over my body," confides one woman. With more cease-fire violations reported every day, the war only appears to be intensifying.
FULL SYNOPSIS
TRANSCRIPT